Environmental scientists use two models to describe how populations grow over time: the exponential growth model and the logistic growth model. Two important concepts underlie both models of population growth: 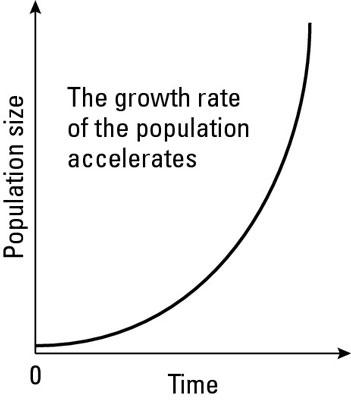 The line, or curve, you see in the figure shows how quickly a population can grow when it doesn’t face any limiting resources. The line creates a shape like the letter J and is sometimes called a J-curve.

In reality, the growth of most populations depends at least in part on the available resources in their environments. To model more realistic population growth, scientists developed the logistic growth model, which illustrates how a population may increase exponentially until it reaches the carrying capacity of its environment. When a population’s number reaches the carrying capacity, population growth slows down or stops altogether. This figure illustrates the logistic growth model. 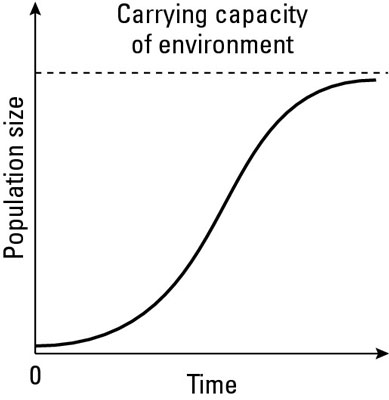 Scientists describe the logistic growth model with the following equation, which uses the same symbols as the exponential growth model (see the preceding section):

The best part about this equation is that it includes a way to factor in the negative feedback effect of a larger population relying on the same resources as a smaller population.

While the logistic growth model is often more descriptive of what occurs in reality than the exponential growth model, it still doesn’t accurately describe what usually occurs in real life. What scientists have actually observed in nature is that populations seldom reach the carrying capacity and remain stable. Rather, they experience a pattern called overshoot and die off.

This figure shows what the pattern of overshoot and die off looks like. A common situation that leads to this pattern is the variation in resource availability from year to year. For example, although plenty of food is available this spring while a population is reproducing, by the time the offspring are born, the food resources may have shifted enough that they can’t support all the new offspring. 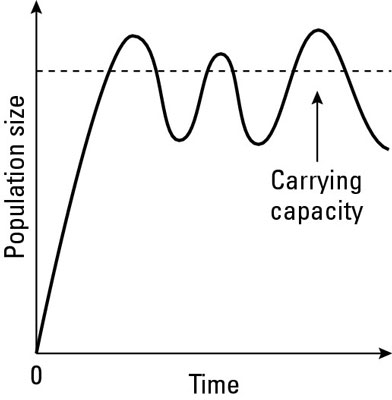