What Factors Affect the Speed of Chemical Reactions?

There are several factors that affect the speed of a reaction:

If you want to produce as much of a product as possible as fast as possible in a chemical reaction, you must consider the kinetics of the reaction.

Sometimes, in very complex molecules, the reactive site is totally blocked off by other parts of the molecule, so no reaction occurs. There may be a lot of collisions, but only the ones that occur at the reactive site have any chance of leading to chemical reaction.

In general, the reaction rate is slower when the reactants are large and complex molecules.

Reaction depends on collisions. The more surface area on which collisions can occur, the faster the reaction. You can hold a burning match to a large chunk of coal and nothing will happen. But if you take that same piece of coal, grind it up very, very fine, throw it up into the air, and strike a match, you’ll get an explosion because of the increased surface area of the coal.

Increasing the number of collisions speeds up the reaction rate. The more reactant molecules there are colliding, the faster the reaction will be. For example, a wood splint burns okay in air (20 percent oxygen), but it burns much faster in pure oxygen.

The pressure of gaseous reactants has basically the same effect as concentration. The higher the reactant pressure, the faster the reaction rate. This is due to the increased number of collisions. But if there’s a complex mechanism involved, changing the pressure may not have the expected result.

The following figure shows an example of how increasing the temperature affects the kinetic energy of the reactants and increases the reaction rate. 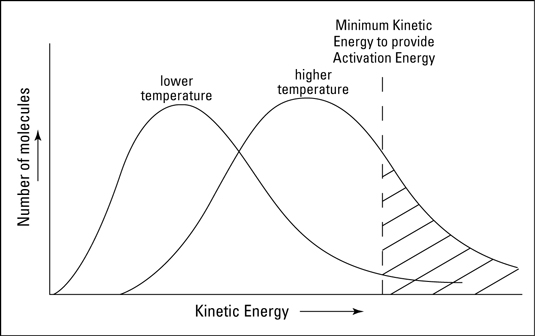 The effect of temperature on the kinetic energy of reactants.

In the preceding figure, if you shift to the left that dotted line representing the minimum amount of kinetic energy needed to provide the activation energy, then many more molecules will have the minimum energy needed, and the reaction will be faster.

Catalysts lower the activation energy of a reaction in one of two ways: