The Unusual Properties of Water Molecules

Explore Book Buy On Amazon
Water molecules have unusual chemical and physical properties. Water can exist in all three states of matter at the same time: liquid, gas, and solid.

Imagine that you’re sitting in your hot tub (filled with liquid water) watching the steam (gas) rise from the surface as you enjoy a cold drink from a glass filled with ice (solid) cubes. Very few other chemical substances can exist in all these physical states in this close of a temperature range.

Following are some of the unique properties of water:

Water has many unusual properties because of its polar covalent bonds. Oxygen has a larger electronegativity than hydrogen, so the electron pairs are pulled in closer to the oxygen atom, giving it a partial negative charge. Subsequently, both of the hydrogen atoms take on a partial positive charge. The partial charges on the atoms created by the polar covalent bonds in water are shown in the following figure. 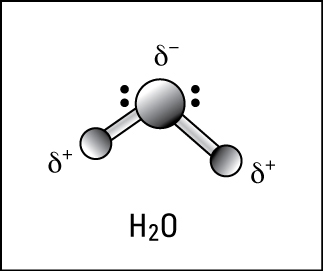 Water is a dipole and acts like a magnet, with the oxygen end having a negative charge and the hydrogen end having a positive charge. These charged ends can attract other water molecules. This attraction between the molecules is an intermolecular force (force between different molecules).

Intermolecular forces can be of three different types:

Water molecules are stabilized by these hydrogen bonds, so breaking up (separating) the molecules is very hard. The hydrogen bonds account for water’s high boiling point and ability to absorb heat. When water freezes, the hydrogen bonds lock water into an open framework that includes a lot of empty space.

In liquid water, the molecules can get a little closer to each other, but when the solid forms, the hydrogen bonds result in a structure that contains large holes. The holes increase the volume and decrease the density.

This process explains why the density of ice is less than that of liquid water (the reason ice floats). The structure of ice is shown below, with the hydrogen bonds indicated by dotted lines. 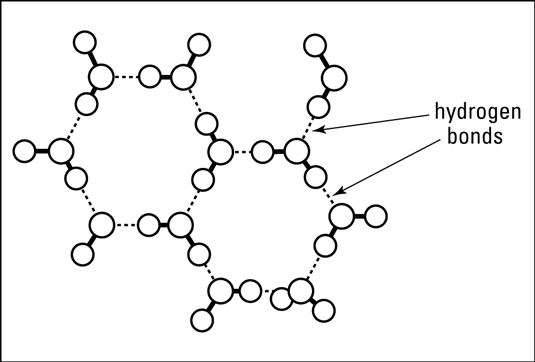 The structure of ice