The Periodicity of Chemical Elements

A pattern of repeating order is called periodicity. In the mid-1800s, Dmitri Mendeleev, a Russian chemist, noticed a repeating pattern of chemical properties in elements.

The periodic table enables chemists and chemistry students to:

The elements in the following periodic table are arranged in order of increasing atomic number. The atomic number (number of protons) is located right above the element symbol.

Under the element symbol is the atomic mass, or atomic weight (sum of the protons and neutrons). Atomic mass is a weighted average of all naturally occurring isotopes. 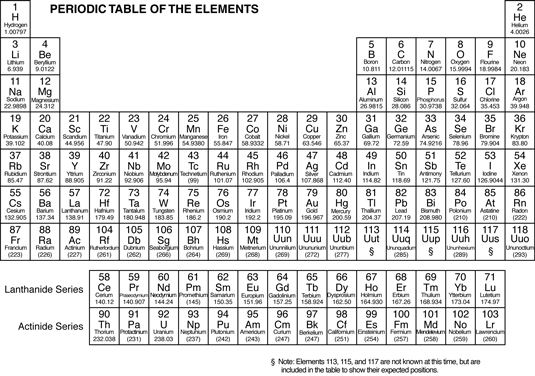 The periodic table is composed of horizontal rows called periods. The periods are numbered 1 through 7 on the left-hand side of the table. The vertical columns are called groups, or families. Members of these families have similar properties.

The families may be labeled at the top of the columns in one of two ways. The older method uses Roman numerals and letters. Many chemists prefer and still use this method. The newer method simply uses the numbers 1 through 18.