By: Michael Matson and Alvin W. Orbaek and
Updated: 12-09-2019
From The Book: Inorganic Chemistry For Dummies 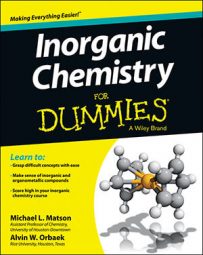 Explore Book Buy On Amazon
The table is like a shelf that is used to organize all the elements found in nature, and some that are man-made even. It is useful because it arranges each element into a box, sort of like how you arrange your kitchen into hot spices, sweet spices, sugar, and flour, for example. So when you want to cook up a storm, you know where to get the ingredients necessary; you can think of the periodic table elements as nature’s list of ingredients. Learning the properties of each ingredient and knowing what happens when they are mixed at certain concentrations at specific temperatures and pressure is what an inorganic chemist does.

The periodic table can be used to determine the following properties of materials:

Moving left to right across the periodic table shown in the following figure, the atomic size decreases because of the additional nuclear charge due to addition of neutrons and protons in the nucleus. This makes the orbital electrons be more tightly bound, and the ionization energy increases because of that.