How to Represent Electrons in an Energy Level Diagram

Chemists use the energy level diagram as well as electron configuration notation to represent which energy level, subshell, and orbital are occupied by electrons in any particular atom. Chemists use this information in these ways:

The following diagram is a blank energy level diagram you can use to depict electrons for any particular atom. Not all the known orbitals and subshells are shown. But with this diagram, you should be able to do most anything you need to. 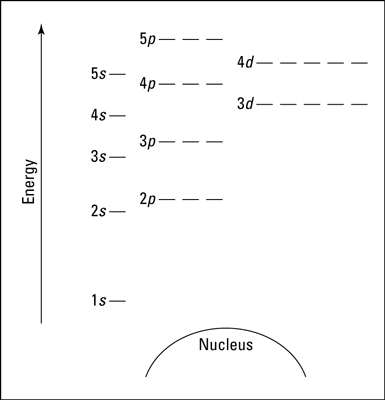 In the preceding diagram, orbitals are represented with dashes in which you can place a maximum of two electrons. The 1s orbital is closest to the nucleus, and it has the lowest energy. It’s also the only orbital in energy level 1.

At energy level 2, there are both s and p orbitals, with the 2s having lower energy than the 2p. The three 2p subshells are represented by three dashes of the same energy.

Energy levels 3, 4, and 5 are also shown. Notice that the 4s has lower energy than the 3d: This is an exception to what you may have thought, but it’s what’s observed in nature.

The next diagram shows the Aufbau Principle, a method for remembering the order in which orbitals fill the vacant energy levels. 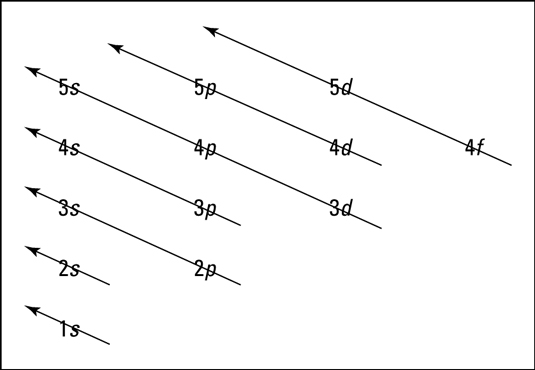 You can represent electrons as arrows. If two electrons end up in the same orbital, one arrow faces up and the other faces down.

The first electron goes into the 1s orbital, filling the lowest energy level first, and the second one spin pairs with the first one.

Electrons 3 and 4 spin pair in the next lowest vacant orbital — the 2s.

Electron 5 goes into one of the 2p subshells (it doesn’t matter which one — they all have the same energy), and electrons 6 and 7 go into the other two totally vacant 2p orbitals.

The last electron spin pairs with one of the electrons in the 2p subshells (again, it doesn’t matter which one you pair it with). The completed energy level diagram for oxygen appears in the following illustration. 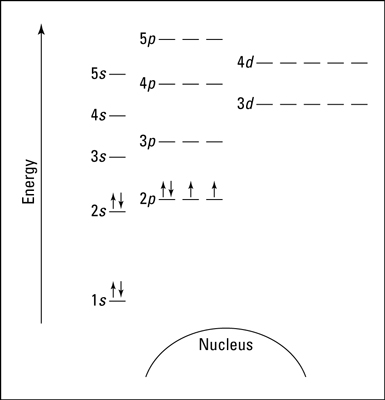 An energy level diagram for oxygen.