Negative charges prefer to rest on the more electronegative atoms.

Electronegativity increases as you go up and to the right on the periodic table.

The size of the atom also plays a role in stabilizing the negative charge. Charges prefer to be on larger atoms than on smaller atoms. This preference results from large atoms allowing the negative charge to delocalize over a much larger region of space, instead of being concentrated in a small region (as it would on a small atom). As a rule, atom size trumps electronegativity considerations. So, even though fluorine is a more electronegative atom than iodine, HI is more acidic than HF. The much larger iodine atom allows the negative charge to delocalize over a larger space than does the much smaller fluorine atom, and thus makes hydrogen iodide more acidic. The effect that atom size has on acidity is shown here.

The size of the atom contributes to acidity.

The types of orbitals affect acidity.

Electron-withdrawing groups on an acid also stabilize the conjugate base anion by allowing some of the charge on the anion to delocalize to other parts of the molecule. For example, trifluoroethanol (shown here) is more acidic than ethanol. 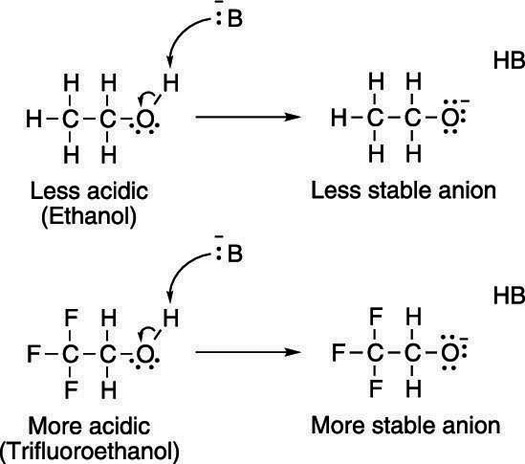 Electron-withdrawing groups add to a molecule's acidity by stabilizing its conjugate base anion.

The highly electronegative fluorine atoms (which are electron pigs) on trifluoroethanol pull electron density away from the anion, taking away some of the negative charge from the oxygen, thereby stabilizing the molecule. 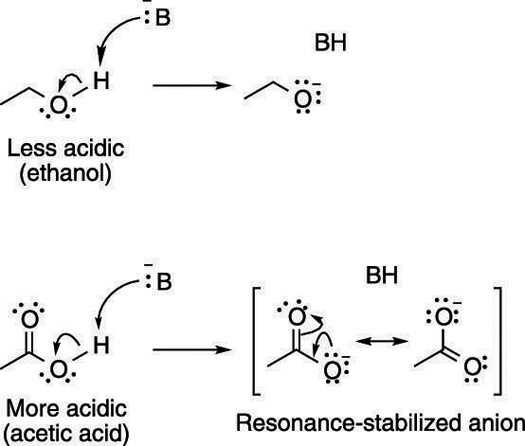 Resonance structures are a stabilizing feature of molecules and ions.