How to Identify Multiple or Complex Substituents in a Branched Alkane

Explore Book Buy On Amazon
When searching for the substituents in a branched alkane, you may run across some situations where you aren't sure how to proceed. For example, what do you do when there are two or more instances of the same substituent? And what if a complex substituent appears on one of the branches?

Identify and name multiple instances of the same constituent

These prefixes are ignored when placing the substituents in alphabetical order (dimethyl would be alphabetized under m, for example). This figure shows two examples of molecules that have identical substituents. Note the use of commas to separate the numbers preceding the substituent name.

Sometimes, substituents will branch and will have no common name, like the substituent shown here:

An alkane with a complex substituent
In such a case, you name the substituent just as if it were a separate alkane, but with the parent name of the substituent ending with the suffix –yl instead of –ane, indicating that this portion of the molecule is a substituent off the main chain. 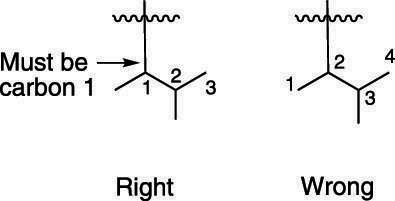 Because you're naming a substituent off the parent chain, the name must end with the suffix –yl, not –ane.