How to Identify Molecular Fragmentation Patterns in Mass Spectrometry

Explore Book Buy On Amazon
Whether through alpha cleavage or loss of a water molecule, molecular fragmentation in a mass spectrometer tends to follow certain patterns. You can often predict what peaks will be observed in the mass spectrum simply by looking at a molecule's structure and seeing which pieces would be easy to break off to make stable cations. 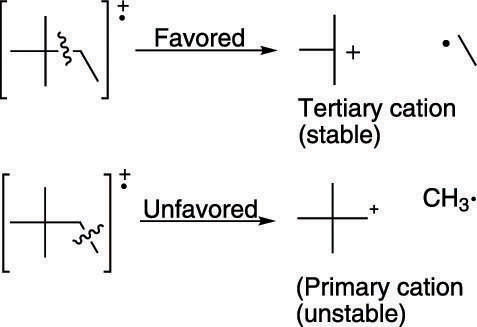 Favored and unfavored bond cleavage
When a molecule contains heteroatoms (elements such as oxygen, sulfur, and nitrogen), breaking next to these atoms makes cations that are resonance stabilized. For example, breaking the C-C bond next to an alcohol group creates a resonance-stabilized carbocation. This type of break is called alpha cleavage and is commonly seen in alcohols (as shown here).

Amine alpha cleavage
Alpha cleavage is also commonly seen in ethers, where the bond breaks adjacent to the oxygen (shown in the next figure).

Ether alpha cleavage
Breaks are often seen next to carbonyl groups (C=O groups), because this creates the resonance-stabilized cation (shown in the next figure).

Carbonyl alpha cleavage
In addition to alpha cleavage, alcohols readily lose a water molecule to form an alkene (a carbon-carbon double bond), as shown in the next figure. This is why the mass spectrum of an alcohol often has a peak corresponding to the loss of 18 mass units (the weight of water).