How to Distinguish Pure Substances and Mixtures

Explore Book Buy On Amazon
Chemists can classify matter as solid, liquid, or gas. But there are other ways to classify matter, as well — such as pure substances and mixtures. Classification is one of the basic processes in science. All matter can be classified as either a pure substance or a mixture. 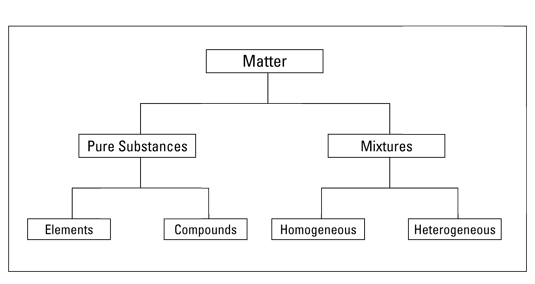 The classification of matter.

An element is composed of a single kind of atom. An atom is the smallest particle of an element that still has all the properties of the element.

Here’s an example: Gold is an element. If you slice and slice a chunk of gold until only one tiny particle is left that can’t be chopped any more without losing the properties that make gold gold, then you’ve got an atom.

The atoms in an element all have the same number of protons. Protons are subatomic particles — particles of an atom. Elements are the building blocks of matter. And they’re represented in a strange table you may have seen at one time or another — the periodic table.

A compound is composed of two or more elements in a specific ratio. For example, water is a compound made up of two elements, hydrogen (H) and oxygen (O). These elements are combined in a very specific way — in a ratio of two hydrogen atoms to one oxygen atom, known as:

Chemists can’t easily separate the components of a compound. They have to resort to some type of chemical reaction.

Mixtures are physical combinations of pure substances that have no definite or constant composition — the composition of a mixture varies according to who prepares the mixture.

Although chemists have a difficult time separating compounds into their specific elements, the different parts of a mixture can be easily separated by physical means, such as filtration.

For example, suppose you have a mixture of salt and sand, and you want to purify the sand by removing the salt. You can do this by adding water, dissolving the salt, and then filtering the mixture. You then end up with pure sand.

Mixtures can be either homogeneous or heterogeneous: