How to Disqualify Molecular Fragments Based on NMR Peak Splitting

When you have identified all the fragments of a molecular compound, you can use information such as NMR peak splitting, chemical shift, and degrees of unsaturation to help identify the compound's final structure.

Here's an example: On an exam, you are asked to determine the structure for the molecular formula C5H10O (you are also given the 1H NMR and IR spectra for the molecule). After identifying all of the molecule's fragments, you narrow down the possible structures to two, as shown here.

Now that the choices are narrowed down to two, you want to rule out the one that is the least consistent with the peak splitting and the chemical shift. Try possible compound A first.

You can easily rule out this compound because it has a center of symmetry — that is, the left-hand side of the molecule is identical to the right-hand side. Therefore, you would expect to see just two peaks in the 1H NMR for this compound rather than the four you see in the next figure, because both methyl (CH3) groups would be in identical chemical environments, and both methylene (CH2) groups would also be in identical chemical environments. 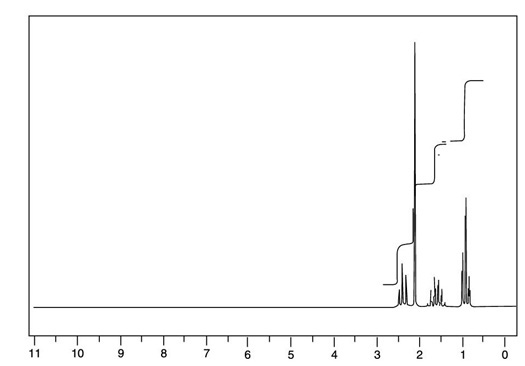 The NMR spectrum for the C5H10O compound, showing four peaks in the 1H NMR.

This leaves compound B as the only possible structure for the molecular formula C5H10O.