Explore Book Buy On Amazon
Electronegativity is the strength an atom has to attract a bonding pair of electrons to itself. When a chlorine atom covalently bonds to another chlorine atom, the shared electron pair is shared equally. The electron density that comprises the covalent bond is located halfway between the two atoms.

But what happens when the two atoms involved in a chemical bond aren’t the same? The two positively charged nuclei have different attractive forces; they “pull” on the electron pair to different degrees. The end result is that the electron pair is shifted toward one atom.

Electronegativities give information about what will happen to the bonding pair of electrons when two atoms bond. A bond in which the electron pair is equally shared is called a nonpolar covalent bond. You have a nonpolar covalent bond anytime the two atoms involved in the bond are the same or anytime the difference in the electronegativities of the atoms involved in the bond is very small. 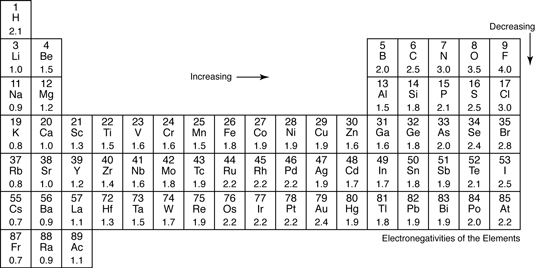 The presence of a polar covalent bond in a molecule can have some pretty dramatic effects on the properties of a molecule.

If the two atoms involved in the covalent bond are not the same, the bonding pair of electrons are pulled toward one atom, with that atom taking on a slight (partial) negative charge and the other atom taking on a partial positive charge.

In most cases, the molecule has a positive end and a negative end, called a dipole (think of a magnet). The following figure shows a couple of examples of molecules in which dipoles have formed. (The little Greek symbol by the charges refers to a partial charge.)

The same thing takes place in ammonia, known as

The presence of a polar covalent bond explains why some substances act the way they do in a chemical reaction: because this type of molecule has a positive end and a negative end, it can attract the part of another molecule with the opposite charge.