The common flashlight cell, a dry electrochemical cell, is contained in a zinc housing that acts as the anode (the electrode at which oxidation takes place). The other electrode, the cathode (where reduction takes place), is a graphite rod in the middle of the cell.

A layer of manganese oxide and carbon black (one of the many forms of carbon) surrounds the graphite rod, and a thick paste of ammonium chloride and zinc chloride serves as the electrolyte. The diagram shows the structure of a dry cell. The dry cell reactions are shown in the following.

Note that the case of the dry cell is actually one of the electrodes; it’s being used up in the reaction. If there’s a thin spot in the case, a hole could form, and the cell could leak the corrosive contents. In addition, the ammonium chloride tends to corrode the metal case, again allowing for the possibility of leakage.

In the alkaline dry cell (alkaline battery), the acidic ammonium chloride of the regular dry cell is replaced by basic (alkaline) potassium hydroxide. With this chemical, corrosion of the zinc case is greatly reduced.

A battery is composed of two or more cells connected together. You put a battery in your car, but you put a cell into your flashlight. 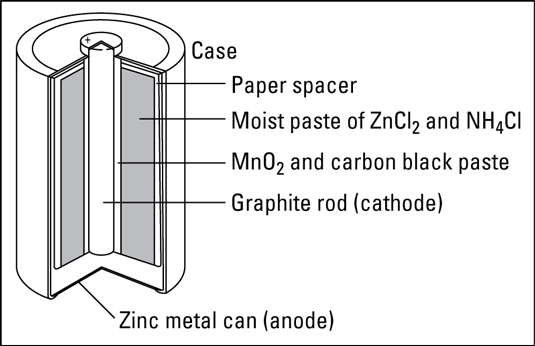 Another cell with the same basic construction is the small mercury battery commonly used in watches, pacemakers, and so on. With this battery, the anode is zinc, as in the regular dry cell, but the cathode is steel. Mercury(II) oxide (HgO) and some alkaline paste form the electrolyte.

You should dispose of small mercury batteries (such as those used in watches) carefully, to keep the mercury from being released into the environment.

All these galvanic cells produce electricity until they run out of a reactant. Then they must be discarded. However, there are cells that can be recharged, as the redox reaction can be reversed to regenerate the original reactants. Nickel-cadmium (Ni-Cad) and lithium batteries fall into this category. The most familiar type of rechargeable battery is probably the automobile battery.