Explore Book Buy On Amazon
A covalent bond is a chemical bond that comes from the sharing of one or more electron pairs between two atoms. Hydrogen is an example of an extremely simple covalent compound.

Hydrogen is #1 on the periodic table. The hydrogen found in nature is often not comprised of an individual atom. It’s primarily found as the diatomic (two atom) compound:

Hydrogen has one valence electron. It’d love to gain another electron to fill its 1s energy level, which would make it isoelectronic with helium (because the two would have the same electronic configuration), the nearest noble gas.

Energy level 1 can only hold two electrons in the 1s orbital, so gaining another electron fills it. That’s the driving force of hydrogen — filling the valence energy level and achieving the same electron arrangement as the nearest noble gas.

This process of electron loss and gain simply won’t happen, because the driving force of both atoms is to fill their valence energy level. So the hydrogen compound can’t result from the loss or gain of electrons. What can happen is that the two atoms can share their electrons. At the atomic level, this sharing is represented by the electron orbitals (sometimes called electron clouds) overlapping.

The two electrons (one from each hydrogen atom) “belong” to both atoms. Each hydrogen atom feels the effect of the two electrons; each has, in a way, filled its valence energy level. A covalent bond is formed. The overlapping of the electron orbitals and the sharing of an electron pair is represented in part (a) of the following figure. 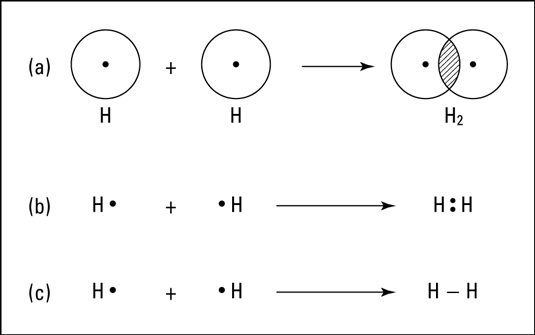 The formation of a covalent bond in hydrogen
Another way to represent this process is through the use of an electron-dot formula. In this type of formula, valence electrons are represented as dots surrounding the atomic symbol, and the shared electrons are shown between the two atoms involved in the covalent bond. The electron-dot formula representations are shown in part (b) of the preceding figure.

In addition to hydrogen, six other elements are found in nature in the diatomic form: oxygen, nitrogen, fluorine, chlorine, bromine, and iodine.

Comparing covalent bonds with other bonds

Ionic bonding occurs between a metal and a nonmetal. Covalent bonding, on the other hand, occurs between two nonmetals. The properties of these two types of compounds are different. Ionic compounds are usually solids at room temperature, while covalently bonded compounds can be solids, liquids, or gases.

Metals don’t really react with other metals to form compounds. Instead, the metals combine to form alloys, solutions of one metal in another. But there is such a situation as metallic bonding, and it’s present in both alloys and pure metals.