What's the Basic Structure of Nerves?

Each neuron contains a nerve cell body with a nucleus and organelles such as mitochondria, endoplasmic reticulum, and Golgi apparatus. Branching off the nerve cell body are the dendrites, which act like tiny antennae picking up signals from other cells.

At the opposite end of the nerve cell body is the axon, which is a long, thin fiber with branches at the end that sends signals. The axon is insulated by a myelin sheath made up of segments called Schwann cells. Nerve impulses are received by the dendrites, travel down the branches of the dendrites to the nerve cell body, and are carried along the axon.

When the impulse reaches the branches at the end of the axon, it is transmitted to the next neuron. Impulses continue to be carried in this way until they reach their final destination. The final destination depends on what type of neurons they are. 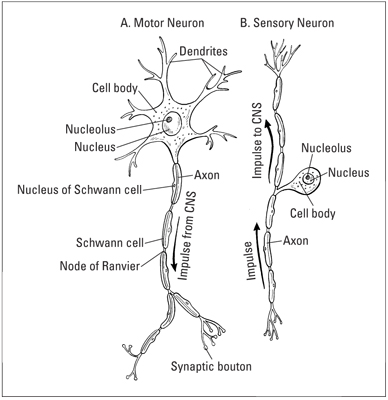 The basic structure of (A) motor neuron and (B) sensory neuron, including the path of an impulse.

The three types of neurons

There are three types of neurons, each with different functions. The function of the neuron determines where those neurons transmit their impulses.