The Path of Blood through the Human Body

Explore Book Buy On Amazon
When a heart contracts and forces blood into the blood vessels, there is a certain path that the blood follows through the human body. The blood moves through pulmonary circulation and then continues on through systemic circulation. Pulmonary and systemic are the two circuits in the two-circuit system of higher animals with closed circulatory systems. 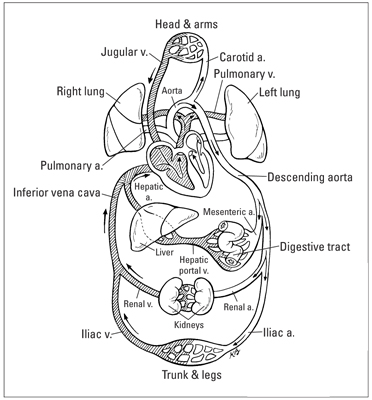 The pulmonary artery carries the blood that is very low in oxygen to the lungs, where it becomes oxygenated.

The pulmonary veins enter the left atrium. When the left atrium relaxes, the oxygenated blood drains into the left ventricle through the left AV valve. This valve is also called the bicuspid valve because it has only two flaps in its structure.

Now the heart really squeezes. As the left ventricle contracts, the oxygenated blood is pumped into the main artery of the body — the aorta. To get to the aorta, blood passes through the aortic semilunar valve, which serves to keep blood flowing from the aorta back into the left ventricle.

The aorta branches into other arteries, which then branch into smaller arterioles. The arterioles meet up with capillaries, which are the blood vessels where oxygen is exchanged for carbon dioxide.

To maintain the health of cells, it is also necessary for the capillaries to transport wastes and carbon dioxide to places in the body that can dispose of them. The waste products enter near the venous end of the capillary. Water diffuses in and out of capillaries to maintain blood volume, which adjusts to achieve homeostasis.

The process of capillary exchange is how oxygen leaves red blood cells in the bloodstream and gets into all the other cells of the body. Capillary exchange also allows nutrients to diffuse out of the bloodstream and into other cells. At the same time, the other cells expel waste products that then enter the capillaries, and carbon dioxide diffuses out of the body’s cells and into the capillaries. 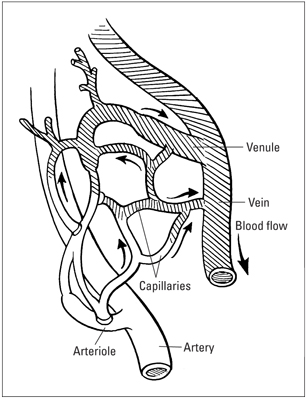 How capillary exchange works.
After the capillaries “pick up” the garbage from other cells, the capillaries carry the wastes and carbon dioxide through the deoxygenated blood to the smallest of the veins, which are called venules. The venules branch into bigger vessels called veins. The veins then carry the deoxygenated blood toward the main vein, which is the vena cava. The two branches of the vena cava enter the right atrium, which is where pulmonary circulation begins.