The Outer Membrane of Prokaryotic Cells

The plasma membrane borders the cell and acts as a barrier between the inside of the cell and the outside environment. The membrane serves many important functions in prokaryotic cells, including the following:

The plasma membrane is made of a phospholipid bilayer. Individual phospholipids are composed of a charged phosphate “head” group and an uncharged lipid “tail” group. Because phospholipids contain charged and uncharged components, they’re amphipathic (they can interact with both lipid and aqueous solutions).

Think of lipid and aqueous solutions as oil and water — they can’t really mix and tend to separate. The tails of phospholipids are hydrophobic (repellant of water), so they repel water such that in a solution of water they arrange tail-to-tail to limit their contact with it. 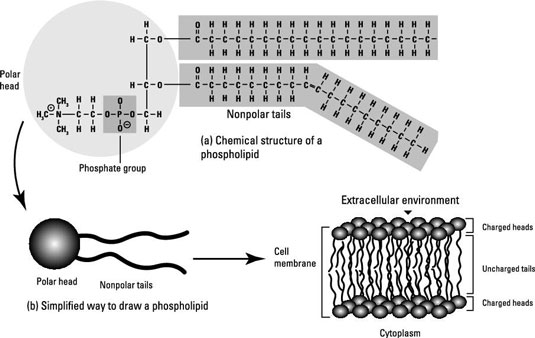 Not all membranes are the same

The phospholipid bilayer is common to eukaryota, archaea, and bacteria, but there are several differences that set their membranes apart:

The fat facts about the plasma membrane

Integral proteins float within the phospholipid bilayer and are able to move laterally, like a buoy in a lake that moves back and forth with the movement of the water. Proteins are mobile in the membrane because the membrane’s consistency is similar to that of cooking oil. The membrane is studded with many proteins that freely move throughout it.