Explore Book Buy On Amazon
In order to make sure that inserted genes don’t get broken down, it helps if scientists can send the DNA into the genetically modified organism’s cells in an acceptable form that they won’t destroy. One way that scientists do this is with the use of vectors.

When a DNA molecule contains DNA from more than one source, it’s called recombinant DNA. 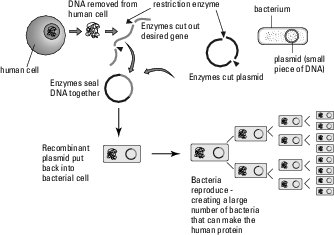 Genetic engineering of a bacterial cell with a human gene.