Explore Book Buy On Amazon
DNA can undergo rewriting in a process called transcription. DNA molecules are long chains made from four different building blocks called nucleotides that biologists represent with the letters A, T, C, and G. These chemical units are joined together in different combinations that form the instructions for cells’ functional molecules, which are mostly proteins.

When your cells need to build a particular protein, the enzyme RNA polymerase locates the gene for that protein and makes an RNA copy of it. Because RNA and DNA are similar molecules, they can attach to each other just like the two strands of the DNA double helix do. RNA polymerase slides along the gene, matching RNA nucleotides to the DNA nucleotides in the gene. 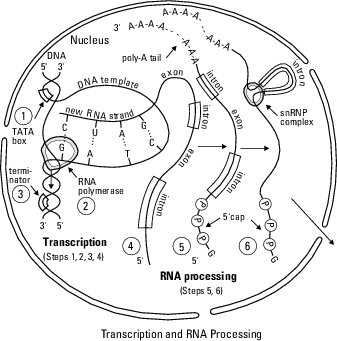 Transcribing DNA and processing mRNA within the nucleus of a eukaryotic cell.

The base-pairing rules for matching RNA and DNA nucleotides are almost the same as those for matching DNA with DNA. The exception is that RNA contains nucleotides with uracil (U) rather than thymine (T). During transcription, RNA polymerase pairs C with G, G with C, A with T, and U with A. (that the new RNA strand CUAG pairs up with the DNA sequence GATC in the gene

It may seem strange that your cells copy the information in your genes into a sort of mirror image made of RNA, but it actually makes a lot of sense. Your genes are extremely important and need to be protected, so they’re kept safe in the nucleus at all times. Your cells make copies of any information they need so the original DNA doesn’t get damaged.

You can think of your chromosomes like drawers in a file cabinet. When your cells need information from the files, they open a drawer, take out a file (the gene), and make a copy of the information (the RNA molecule) that can travel out into the world (the cytoplasm). The original blueprint (the DNA) is kept safely locked away in the file cabinet.

Of course, RNA polymerase and DNA aren’t the only things involved in transcription. Keep reading to find out more.

Finding out what else is involved with transcription

RNA polymerase locates the genes it needs to copy with the help of proteins called transcription factors. These proteins look for certain sequences in the DNA that mark the beginnings of genes; these sequences are called promoters.

Walking through the transcription process

As you can see from the following, the process of transcription is pretty straightforward:

Your cells use transcription to make several types of RNA molecules. Some of these RNA molecules are worker molecules for the cell, others are part of cellular structures, and one type — mRNA — carries the code for proteins to the cytoplasm.