Prokaryotes and Their Characteristics

Explore Book Buy On Amazon
Prokaryotes include cells you’ve probably heard of, such as the bacteria E. coli and Streptococcus (which causes strep throat), the blue-green algae that occasionally cause lake closures, and the live cultures of bacteria in yogurt, as well as some cells you may never have heard of, called archaeans.

Whether you’ve heard of a specific prokaryote or not, you’re likely well aware that bacteria have a pretty bad rap. They seem to make the papers only when they’re causing problems, such as disease. Behind the scenes, though, bacteria are quietly performing many beneficial tasks for people and the rest of life on planet Earth.

The cells of prokaryotes are fairly simple in terms of structure because they don’t have internal membranes or organelles like eukaryotic cells do. The majority of prokaryotic cells share these characteristics: 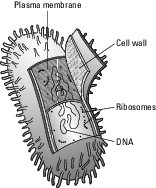