Major Rearrangements to the Genetic Code

Changes to an organism’s DNA can also happen on a larger scale than with point mutations, where regions of DNA from two different sources get combined. The process of incorporating sequences from different sources into the same chromosome is called recombination; it occurs in different contexts in eukaryotes and bacteria. 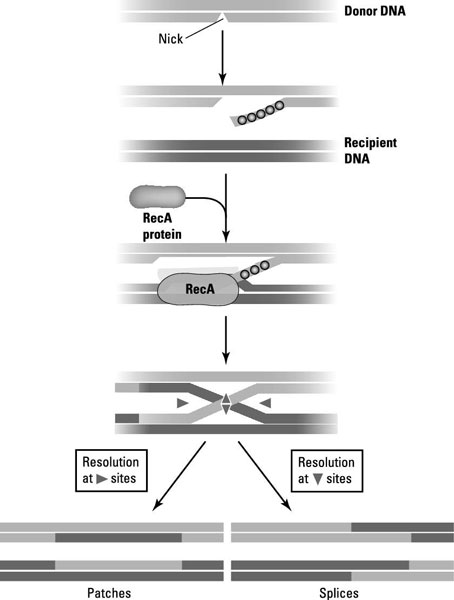 Eukaryote microorganisms have a specific genetic recombination step built into the formation of the sex cells, where parts of each pair of diploid chromosomes get exchanged, thus increasing the genetic diversity of the resulting spores. In bacteria, genetic recombination is not linked to cell division; instead, it’s part of a few different strategies aimed at increasing genetic diversity, including transformation, conjugation, transduction, and transposition.

Bacteria come upon DNA in their environment all the time because the DNA of previous individuals hangs around long after they’ve died. Bacterial cells that are able to take up foreign DNA are said to be competent.

When cells are competent, large molecules of DNA are able to pass through the cell wall into the cytoplasm, after which recombination is necessary if the DNA is to be incorporated into a bacterial genome.

Gram-negative bacteria produce a sex pilus (a hairlike appendage on the surface of the bacteria) used to make contact between cells, whereas Gram-positive bacteria come into close proximity with one another and make a bridge across cells using sticky substances on the cell surface.

Another way that genetic material can be transferred between bacteria is through the action of a virus that infects one bacterial cell and transfers genes to another bacterial cell, a process called transduction. Viruses that infect bacteria are called bacteriophage or simply phage. There are many kinds of phage, but in general there are two types of transduction by phage:

Transposition is when a small piece of DNA, called a transposon, moves from one location to another within the DNA of an organism. For this to happen, there has to be an enzyme capable of cutting and resealing DNA and recognition sites where the enzyme acts. There are simple and complex transposons but all cause DNA modifications.