Explore Book Buy On Amazon
The excretory system is an important part of the human body. When the human body breaks down food, it uses as many of the nutrients as possible to fuel cellular processes. Of course, you can only squeeze so much out of any given nutrient. What’s left is waste that your body removes via your excretory system, which consists of your large intestine and kidneys.

After the usable nutrients from food are absorbed into the bloodstream from the small intestine, the leftover material continues on to the large intestine (also called the colon). This is where fecal matter (or feces) is created. Feces pass out of your large intestine and into the rectum, which acts like a holding tank. When the rectum is full, you feel the need to defecate (remove fecal material). This feat, signaling the end of the digestive process, is performed through the anus.

As the large intestine converts the leftover material into feces, it absorbs water and some electrolytes from the material and returns that water to the body to prevent dehydration. If too much water is absorbed, constipation occurs; if too little water is absorbed, diarrhea occurs.

The large intestine helps maintain the balance of ions (also called electrolytes) in your body. It absorbs ions such as sodium into its cells from the material passing through it. Sodium ions are necessary for many cellular processes, such as the active transport of materials across cell membranes. The large intestine also collects (from the bloodstream) ions to be excreted, helping to regulate the amount of ions in your body. If the amount of ions in your body isn’t in the normal range, serious effects occur.

For example, if your level of sodium and potassium ions (also called electrolytes) is abnormal, the ability for muscles to contract properly or for nerves to send impulses correctly is affected, which can interfere with your heartbeat and potentially cause a heart attack.

Flowing through how your kidneys remove nitrogenous wastes

Nitrogenous wastes — unnecessary, excess materials containing nitrogen and resulting from the breakdown of proteins and nucleic acids — are released from the body in urine. In humans, the kidneys are the organs responsible for the production of urine.

You have two kidneys, one on each side of your back, just below your ribs. Like most organs in the human body, the function of a kidney is closely tied to its structure. As you can see, each kidney has three distinct areas: 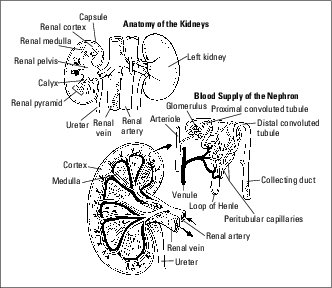 Illustration by Kathryn Born, MA
Structure of the kidneys and the nephrons inside the kidneys.

Each kidney contains more than 1 million nephrons, microscopic tubules that make urine. Each nephron contributes to a collecting duct that carries the urine into the renal pelvis. From there, the urine flows down the ureter, which is the tube that connects the kidney to the bladder.

Urine is spurted from the ureter into the top of the bladder continuously. The bladder holds a maximum of about one pint of urine, but you begin to feel the need to urinate when your bladder is only one-third full. When your bladder is two-thirds full, you start to feel really uncomfortable.

Urine leaves the body through the urethra, a tube at the bottom of the bladder that opens to the outside of the body. It’s held closed by a sphincter muscle. When you want to start urinating, the sphincter muscle relaxes, opening the urethra and letting the urine out.