How to Count the Number of Cells

Microbial experiments often require that we know just how many bacteria, for instance, are present. Knowing the number of microbial cells helps to indicate whether cells are growing or dying and it helps experiments to be consistent from day to day.

Determining the number of bacterial cells that are alive in a sample is done using viable counts. Each method for calculating viable numbers of organisms takes advantage of the fact that when a suspension of bacteria is plated on solid media, each live bacterial cell will grow to form a colony, which is large enough to be seen.

When the concentration of bacteria in a sample is high, it must be diluted enough so that the colonies are distinct from one another, which is done with serial dilution. 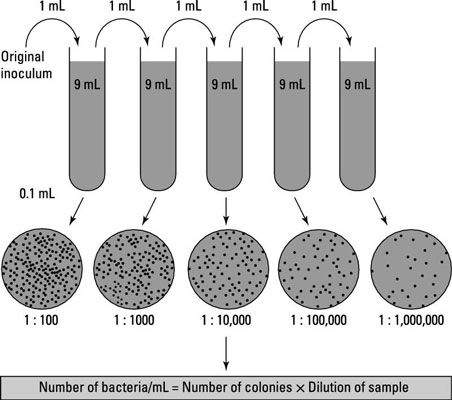 To calculate the number of viable cells in the original sample, the number of colonies present after the plates have been incubated is multiplied by the dilution factor. The number of cells in a sample is usually expressed as colony forming units (CFU) per unit of volume (in this case mL) or CFU/mL.

When the numbers of cells in a sample are very low, such as in lake water, a large volume of the sample can be passed through a filter, which is then cultured with the proper medium to produce colonies of the microbe of interest. In this case, the number of colonies is divided by the volume of sample filtered.

For example, if 5 liters (L) of lake water were filtered and 100 colonies appeared after incubation, then the original number of bacteria in the water was 100 colonies/5 L = 20 CFU/L.

Another way of counting the number of cells in a sample is by direct microscopic counts. With this method, all the cells in the sample — whether alive or dead — are counted, but it gives you an immediate estimate of bacterial numbers without the need to incubate a sample for 24 hours or more.

Turbidity is the amount of light scattering caused by the cells in a liquid culture. A machine called a spectrophotometer passes a beam of light through a clear tube containing a bacterial culture. As the number of cells in a culture increases, more light is scattered and less of it passes through the tube to be recorded on the other side.

Turbidity is expressed as absorbance and as optical density (OD). The higher the number (between 0 and 2), the more concentrated the cells in the solution.

Another way to indirectly estimate the number of cells is to measure the metabolic activity of the sample for a specific substrate. In this way, the amount of waste produced — either a gas that can be captured and measured or a metabolite that can be used with an indicator in the media — can be used to calculate how many growing cells are in the culture.

The last method to indirectly estimate the number of cells is by calculating the dry weight of the organism in culture. This method is often used with fungi that form long filamentous colonies that aren’t easily broken up by dilution. The sample is concentrated and the liquid is removed. Then the cells are dried and weighted.