How Plants Pull and Transport Water

Several processes work together to transport water from where a plant absorbs it (the roots) upward through the rest of its body. To understand how these processes work, you first need to know one key feature of water: Water molecules tend to stick together, literally.

A familiar example of the stickiness of water occurs when you drink water through a straw — a process that’s very similar to the method plants use to pull water through their bodies. You apply suction at the top of the straw, and the water molecules move toward your mouth.

Because the molecules cling to each other on the sides of the straw, they stay together in a continuous column and flow into your mouth.

Scientists call the explanation for how water moves through plants the cohesion-tension theory. It involves three main factors:

Environmental conditions like heat, wind, and dry air can increase the rate of transpiration from a plant’s leaves, causing water to move more quickly through the xylem. Sometimes, the pull from the leaves is stronger than the weak electrical attractions among the water molecules, and the column of water can break, causing air bubbles to form in the xylem.

The sudden appearance of gas bubbles in a liquid is called cavitation.

To repair the lines of water, plants create root pressure to push water up into the xylem. At night, root cells release ions into the xylem, increasing its solute concentration. Water flows into the xylem by osmosis, pushing a broken water column up through the gap until it reaches the rest of the column.

If environmental conditions cause rapid water loss, plants can protect themselves by closing their stomata. However, after the stomata are closed, plants don’t have access to carbon dioxide (CO2) from the atmosphere, which shuts down photosynthesis. Some plants, like those that live in deserts, must routinely juggle between the competing demands of getting CO2 and not losing too much water.

For questions 1–5, use the terms that follow to demonstrate the movement of water through plants by labeling the figure. 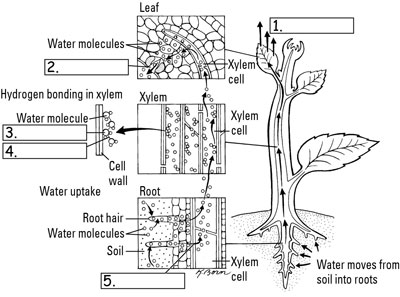