The figure here represents biologists’ current understanding of the tree of life — the phylogenetic tree that shows relationships among all organisms on Earth. Each of the main branches on the family tree represents a unique type of life on Earth, which biologists place into categories they call domains. Within each domain, biologists create smaller categories that represent groups of related organisms. 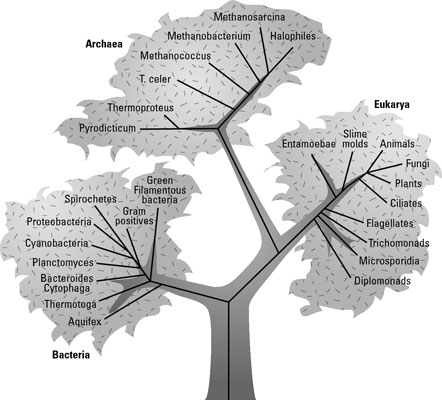 The categories that biologists use for grouping related organisms are called taxa (singular: taxon).

Biologists organize all these categories into a taxonomic hierarchy, a naming system that ranks organisms by their evolutionary relationships. Within this hierarchy, living things are organized from the largest, most-inclusive group (domains) down to the smallest, least-inclusive group (called species).

From largest to smallest groups, the taxonomic hierarchy is

You can think of all the categories of the taxonomic hierarchy as a set of nesting dolls like the Russian matryoshka dolls, where you open a big doll to find a smaller doll inside, which opens to reveal an even smaller doll, and so on.

Here are some practice questions on the classification of life.