In addition to the nervous system’s electrical signals, animals also regulate their bodies with chemical messengers called hormones. Endocrine glands produce the hormones and then release them into the blood to travel through the body until they reach their target cells, the cells that respond to the hormone. For a cell to respond to a particular hormone, it must have receptors for that hormone.

Hormones in vertebrates can be divided into two groups:

When a signal like a hormone reaches a cell and is relayed to molecules within the cell, scientists call it signal transduction.

The endocrine system is the system that handles hormone production and secretion within an organism. It keeps a check on cellular processes and the bloodstream’s components and can make adjustments as necessary.

For questions 1–6, use the following terms to label the events of transduction of a hormone signal shown in the figure. 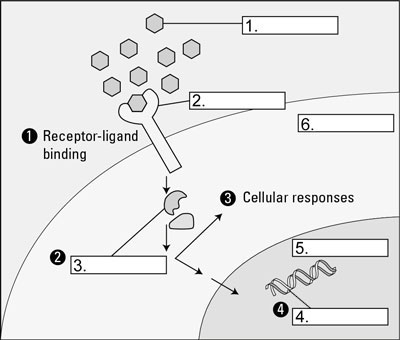 For question 7, use different colored pencils or highlighters to mark the sections of the figure that show the major events that occur during the transduction of a hormone signal:

a. Reception of hormone signal