Explore Book Buy On Amazon
One of the big challenges of genetic engineering is to insert a gene exactly where you want it in the genome of the cell. For example, if you wanted to give someone with a genetic disease a normal copy of her defective gene, the ideal way to do it would be to exactly replace her defective gene with the normal copy.

If you could be this precise, you would avoid the risk of having the normal gene insert itself into another gene, disrupting its code and potentially causing worse problems than the disease you’re trying to treat. (For example, disrupting genes that control cell division could lead to cancer.)

Until very recently, this kind of targeted delivery of genes was something scientists were struggling to achieve. But the recent discovery of how a system of bacterial genes works to target specific DNA sequences changed all that, and it’s already causing a revolution in the field of genetic engineering and gene therapy. The name of the bacterial gene system is the CRISPR-cas system (pronounced crisper-cass by scientists).

CRISPR stands for clustered regularly interspersed short palindromic repeats, which is a crazy-long name that you probably don’t need to try to remember. Cas stands for CRISPR-associated genes. CRISPR got its name because scientists noticed that it contained lots of small palindromic sequences repeated throughout the DNA.

A palindrome is a word or phrase that reads the same forward and backward such as “taco cat.” A palindromic DNA sequence could be “AATTAA.”

Scientists figured out that these repeated palindromes of DNA separated short stretches of viral DNA, leading to the realization that CRISPR-cas plays an immunological role that helps bacteria fight off invading viruses. Here’s the way that it works: In addition to being a very cool bacterial defense system, CRISPR-cas has been adapted by scientists to create a targeted gene delivery system. Two brilliant scientists, Jennifer Doudna and Emmanuelle Charpentier, saw how cas enzymes use bits of crRNA to recognize viral DNA and wondered if they could teach those enzymes to recognize other genes as well.

To make a long story short, they figured out how to make a guide RNA that a cas enzyme called cas-9 could use to search out particular genes. The guide RNA contains a short piece of RNA that has the ability to recognize the target gene (just like the crRNA can recognize viral genes). When the guide RNA finds its matching gene, the cas enzyme cuts that gene. 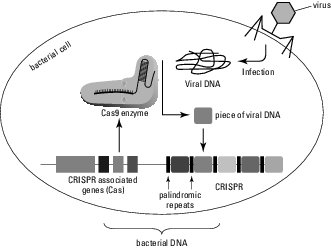 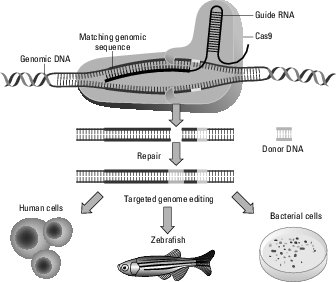 CRISPR-cas in the lab.

For bacteria, the CRISPR-cas system represents a kind of immunity that defends their cells against invading viral DNA. For some very clever scientists, this system represented just the gene targeting system they were looking for.

The ability of CRISPR-cas to recognize and cut specific genes has the potential to help gene therapy in at least two ways: Although the CRISPR-cas breakthrough is very exciting for scientists and it’s already leading to advances in research, many details need to be examined, refined, and tested before it can actually be used in gene therapy.