Generating Oxygen (or Not): Oxygenic and Anoxygenic Photosynthesis

The purpose of photosynthesis is to harness light energy and use it to move electrons through an electron transport chain. Electron carriers are arranged, in order of increasing electropositivity within a membrane. Through this process, a proton motive force is created that is used to produce ATP.

Oxygenic photosynthesis occurs in, among others, eukaryotic microorganisms like algae and in bacteria such as cyanobacteria; the same mechanism is at work in both. Electron flow happens through two different electron transport chains that are connected; together, these electron transport chains are called the Z scheme. The stars of each chain are photosystem I (PSI) and photosystem II (PSII), each containing chlorophyll reaction centers surrounded by antenna pigments. 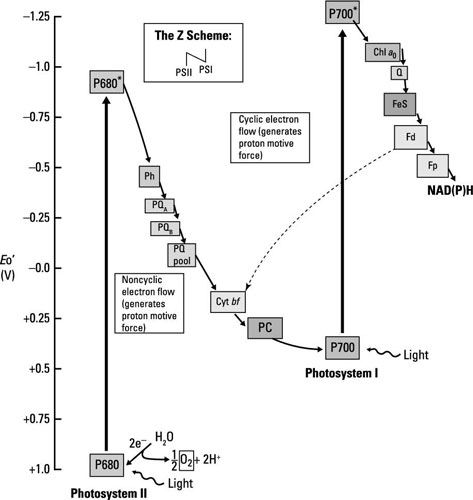 Don’t let the names fool you, the flow of energy is from PSII to PSI.

Aside from the production of NADPH, electron transport functions to create the proton motive force, which is used by ATP synthase to generate ATP.

The cool thing about microbes is how resistant they are to extenuating conditions. For example, when PSII is blocked, some oxygenic phototrophs can use cyclic photophosphorylation with PSI alone in a similar way to how anoxygenic phototrophs do it. Instead of oxidizing water, they use either H2S or H2 as the electron donor to provide the reducing power (the electrons) for CO2 fixation. 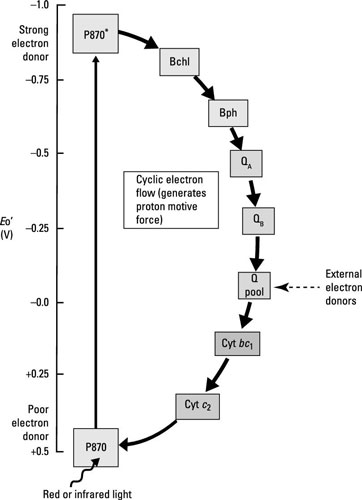 Without NADPH, cells have to come up with another way of generating the reducing power necessary to drive the Calvin cycle for carbon fixation. This is accomplished through oxidization of things like inorganic compounds. The electrons donated are added to either the quinone pool (purple bacteria) or donated to iron-sulfur proteins (the green sulfur and nonsulfur bacteria, and the heliobacteria).