Before genes can be passed from parent cells to their progeny, a copy of the genome has to be made in a process called replication. For circular chromosomes, like those in bacteria and archaea, replication begins at the origin of replication and proceeds in two directions away from that point, simultaneously. 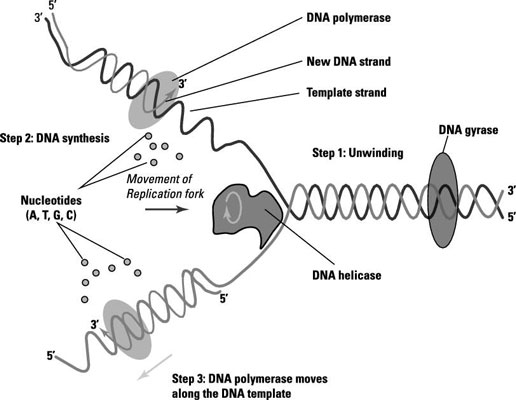 The steps involved in DNA replication must happen in a precise order:

The site where all this is happening is called the replication fork. Because each strand of a double-stranded DNA molecule gets incorporated into one of the two final copies of new DNA molecules, the process is called semi-conservative replication.

DNA polymerase can only add bases in the 5' to 3' direction, so replication proceeds differently on the two strands of DNA in the replication fork.

The 5' and 3' ends of DNA (pronounced five prime and three prime) are the two ends of single strand of DNA. Because double-stranded DNA is made up of two such strands in opposite directions, one strand goes in the 5' to 3' direction and the other goes in the 3' to 5' direction. They’re named this way for the carbon atoms in the pentose sugars in their backbones.

After DNA replication is complete the cell has generated two circular chromosomes from one. Each of these then becomes part of a new cell during cell division. 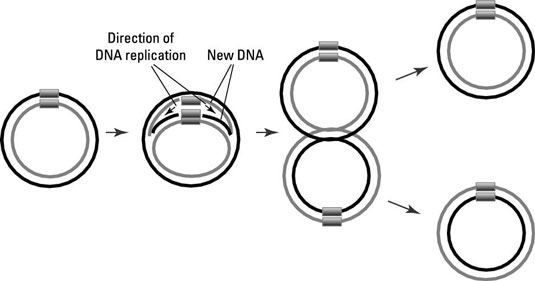 The nucleus in eukaryotes makes things more complicated. Replication of a linear chromosome happens a bit differently than it does for a circular chromosome because DNA polymerase can start replication from each end of the DNA instead of from a point of origin in the middle.

After replication but before cell division, the chromosomes become very condensed into a form called heterochromatin, which can be seen with a microscope. Next, the nucleus disassembles so that copies of the chromosomes can be separated in two directions.

Both haploid and diploid organisms undergo mitosis and cell division, during which they make sure to have the same number of chromosomes in each resulting cell that they started with.

Another type of replication, called meiosis, is used to go from a diploid stage to a haploid stage. Meiosis first involves separation of the two copies of chromosomes from the diploid cell, making two haploid cells during cell division.

The following figure illustrates both meiosis and mitosis. 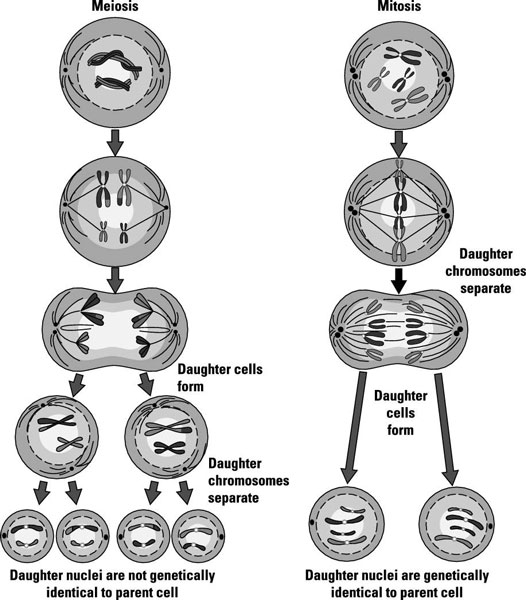