If you imagine the microbial cell as a small factory, then the enzymes are the robots doing all the work. Enzymes are special proteins that are very good at converting things from one form to another. They do this by kicking off the chemical reactions needed for the conversion. The kinds of enzymes a microbe makes determine what type of metabolism the microbe will use to harness energy and grow.

A catalyst is a protein (or sometimes an RNA) molecule that speeds up the rate of a chemical reaction without interfering in the reaction in any other way.

Enzymes have a pocket specifically for the substrates and the products to fit inside of, called an active site. Lysozyme is much bigger than its substrate, peptidoglycan, which fits into its active site and is cleaved (split) into two sugars. 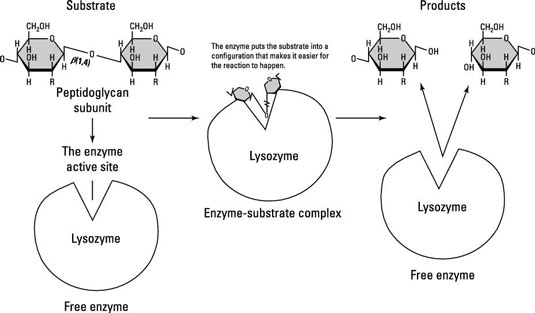 Enzymes are usually specific to one reaction or one group of similar reactions. Another interesting thing about enzymes and the reactions they catalyze is that most are reversible. That means that the products made in a reaction can recombine to re-form the substrates with the help of the same enzyme, as long as the energy change is reversed as well.

If the reaction produces or requires a lot of energy, there is usually a different enzyme for each direction of the reaction.

Coenzymes are small molecules that associate with an enzyme and help in its function but aren’t a substrate. NAD+/NADH is an example of a coenzyme that can associate with many different enzymes and helps with electron transfer. Prosthetic groups, on the other hand, are small molecules that bind permanently and are essential to the enzyme’s activity.