Bacterial cells make a wide variety of lipids from subunits of fatty acids that have some important functions in the cell. Lipids are the main part of membranes and can be used as stores for longer-term storage of energy. Fatty acids are built by adding two carbons at a time to a growing fatty acid chain.

The enzyme acyl carrier protein (ACP) is essential to this process because it holds onto the growing chain until all the carbons have been added.

Fatty acids can either be straight-chained or branched; in addition, they can either be saturated or unsaturated. Straight-chained saturated fatty acids are very straight, while unsaturated sites add kinks and bends in the chain. Straight chains of lipids can be packed more densely next to one another (as in a membrane, for instance). These differences determine how a membrane will function (for example, under different temperatures). 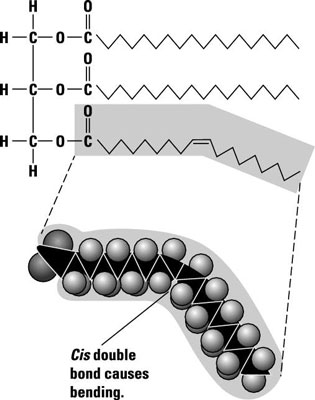 Membrane lipids in particular need to have a polar side and a nonpolar side, meaning one side with a charge and one side without. This allows them to interact with other charged molecules (like water) on one side and to interact with other uncharged molecules (like fats) on the other. This is done by attaching the nonpolar fatty acid chains to a polar group like a carbohydrate or a phosphate.