One of the awesome features of your adaptive immunity is that it can remember a pathogen it has encountered before. This immunologic memory allows your immune system to respond much more effectively when you meet a particular pathogen again.

Certain cells of your immune system, called memory cells, remain in a semiactivated state after your first encounter with a microbe. These memory cells and their descendants hang around for a long time after they’re activated in the first battle.

When the same pathogen shows up again, these cells multiply quickly and efficiently destroy the pathogen before you even realize it came back. Memory cells are the reason why you can get some illnesses only once.

Several types of white blood cells work together to create your adaptive immunity:

Of all these types of white blood cells, your helper T cells are probably the most important. Antigen-presenting cells like dendritic cells and macrophages from your innate immunity activate helper T cells by showing them bits of molecules from pathogens.

After they’re activated, your helper T cells multiply and release communicating molecules called cytokines that stimulate both cytotoxic T cells and B cells. Thus, without the action of helper T cells, your entire immune system would fail.

The HIV virus infects helper T cells, slowly reducing their numbers until a person who’s infected with the virus doesn’t have enough helper T cells to activate his adaptive immunity. At this point, the person develops acquired immunodeficiency syndrome, better known as AIDS. After a person has AIDS, he’s very susceptible to infection and certain cancers, which ultimately cause the person’s death.

The activation of helper T cells and the other cells that make up your immune system involves several steps:

For each of the following questions, name the component of your adaptive defenses that’s the best match for the given description.

For questions 12–20, use the terms that follow to label the cells and steps that occur during activation of your immune system in the figure. 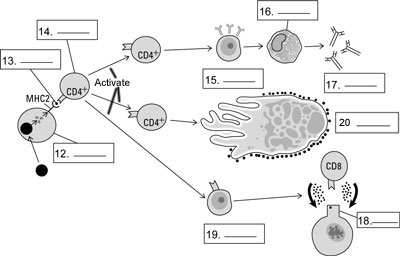