When a neuron is inactive, just waiting for a nerve impulse to come along, the neuron is polarized — that is, the cytoplasm inside the cell has a negative electrical charge, and the fluid outside the cell has a positive charge. This separation of charge sets up conditions for the neuron to respond, just like a separation of charge in a battery sets up conditions that allow a battery to provide electricity.

The electrical difference across the membrane of the neuron is called its resting potential.

The resting potential is created by a transport protein called the sodium-potassium pump. This protein moves large numbers of sodium ions (Na+) outside the cell, creating the positive charge. At the same time, the protein moves some potassium (K+) ions into the cell’s cytoplasm. Because the number of Na+ ions moved outside the cell is greater than the number of K+ ions moved inside, the cell is more positive outside than inside.

When a stimulus reaches a resting neuron, the neuron transmits the signal as an impulse called an action potential.

During an action potential, ions cross back and forth across the neuron’s membrane, causing electrical changes that transmit the nerve impulse:

For questions 1–4, use the following terms to fill in the blanks in each statement.

For questions 5–10, use the terms that follow to label the action potential shown in the following figure. 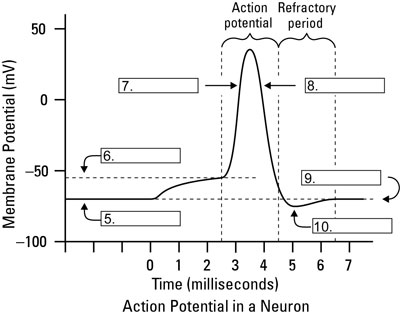 The transmission of a nerve impulse.

The following are the answers to questions 1–4: