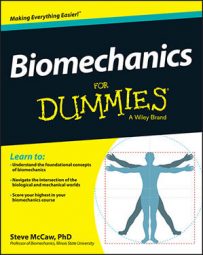 The following ten principles of biomechanics provide a solid basis for looking at performance, whether it's coaching, teaching, rehabilitation, teaching a kid in the driveway, or watching a sporting event on TV. You can think of these principles as a list for quick reference. There may only be ten principles covered here, but seeing how they apply will keep you busy for the rest of your movement-analyzing days.

The principle of force

Force causes movement — that's the fundamental principle of biomechanics. All error detection should be based on this principle. The movement you see occurs because of the forces that were applied. Bad movement reflects bad force.

When providing feedback, avoid simple descriptors of the body position you want to see (bend your leg, lead with the elbow, lean more) or bad performance (jump higher, throw farther, run faster) and focus on identifying and correcting the problem, with force production as the source of the problem.

The principle of linked segments

The simplest model of the human body is a series of linked sticks (individual segments), joined at frictionless hinges (joints). Muscle force pulls on a segment, causing it to rotate faster or slower. The combined action of the muscle force at each joint and the resulting speed of each segment affects the speed at the distal end of the linked segments, such as a foot at the end of a leg or a hand at the end of an arm. (Think of any implement held in the hand as simply an extension of the distal segment.) The speed of the distal segment determines how much force it can apply, like a foot on the ground or a hand on a ball.

Considering the motion of the critical segments throughout the movement and not just the position of an individual segment at a specific instant within the movement gives greater insight into performance.

The principle of impulse-causing momentum

A body speeds up or slows down only while an external force is applied, and it speeds up or slows down only in the direction the force is applied. Impulse is the product of the force and its time of application. Impulse causes a change in the momentum of a body, or how fast it's going in a specific direction. This cause-effect relationship provides a useful approach to analyzing movement. If the body isn't traveling fast enough or isn't going in the desired direction, its momentum is wrong. The problem with the momentum comes from an error in the applied impulse. Errors in the applied impulse arise from force magnitude, force direction, and/or the length of time the force is applied — and these errors stem from the segment motions, not just the positions.

The principle of the stretch-shorten cycle

Because muscle force causes segment motions, it's important to optimize the force produced by the muscles. The key to producing optimal muscle force is the stretch-shorten cycle (SSC). More muscle force is produced when a muscle is stretched before it's shortened (hence, the name SSC). The muscle is stretched when a segment goes backward before it goes forward. The SSC begins with the windup at a joint, and it's probably the most critical component of skilled performance.

Instead of focusing on an "ideal" start position, emphasize using a windup. Always. The windup should be used at all joints, and it should be performed fast — the quickness of the muscle stretching is more important than how much the muscle stretches. There should be no pause at the end of the stretching, just a quick reversal of the joint motion when the muscle shortens. The SSC increases the force produced during muscle shortening and increases the time of force application, both serving to increase the speed of the distal segment.

The principle of summing joint forces

Because the body consists of linked segments, the amount of force in the impulse applied by the distal segment is essentially the sum of the force from all the joints used. More joints contributing and more force from each joint increase the applied impulse. All joints that can contribute should contribute, and the force from each should be as much as is needed. If a joint is not used, or contributes less than its potential, the applied impulse is less. The visual key is the number of joints moving, with the important factor the rate at which they move. Faster joint action indicates more muscle force contribution and produces a greater applied impulse.

The principle of continuity of joint forces

When a movement is performed, look for a smooth continuity of the segment motions, starting from the larger, more proximal segments and flowing outward toward the smaller, more distal segments. This principle applies to both the windup and the shortening phase. The segments should not all move as one unit during either phase. The smooth, sequential timing of the motions from proximal to distal increases the applied impulse by the distal end of the segment. Any pause — evident as a jerkiness or hesitation in the motion — disrupts the smooth proximal-to-distal flow and causes a reduced impulse.

The principle of impulse direction

The principle of rotational motion

A force must produce a torque to change the rotation of a body, which changes its angular momentum. Torque is produced when a force's line of action doesn't go through an axis of rotation, creating a moment arm. A jumper's center of gravity is the axis of rotation when rotating in the air. The torque that causes rotation in the air is produced before the jumper leaves the ground if the ground force has a moment arm to the center of gravity.

A larger force and/or a larger moment arm create a larger torque and a greater change in angular momentum. The ground force is generated from the motions of the segments. It's not just a matter of "leaning" to create the moment arm. The moment arm occurs if the motion of the segments pushes the center of gravity ahead (for a forward rotation) or behind (for a backward rotation) of the jumper's feet while pushing the jumper upward into the air.

The principle of manipulating the moment of inertia

Putting this principle into action is not as easy as the explanation. When a body rotates quickly, the segments tend to move away from the body because of inertia. The muscle force required to overcome inertia and pull body segments in close to the axis of rotation is considerable. Success in jumping rotations requires a lot of upper-body strength, as well as lower-body strength.

The principle of stress causing strain

Stress, the intensity of loading, is how an imposed load is distributed over a tissue. The loading causes a deformation, or strain, in the tissue. The strain from loading during regular physical activity typically causes changes increasing the strength of tissues like muscle, bone, ligament, and tendon if adequate time is provided for the tissue to adapt. If inadequate time is provided, an overuse injury can develop. To reduce overuse injuries, it's best to vary workouts and to provide rest between workouts to allow time for the adaptations to occur.

Injury can also develop when a high level of stress causes more extensive damage to a tissue. Safety equipment like helmets and facemasks are designed to reduce the magnitude of, and redistribute an imposed force over, a larger area of a tissue that's better able to withstand stress. Improperly fitted or worn-out equipment won't provide safety by reducing stress.

Steve McCaw, PhD, is a professor at Illinois State University. Dr. McCaw has taught Biomechanics of Human Movement, Occupational Biomechanics, and Quantitative Biomechanics and has vast experience presenting biomechanics concepts in easy-to-understand formats for use in criminal and civil cases.