How Your Cells Metabolize

Explore Book Buy On Amazon
Your body's reactions that convert fuel (specifically glucose) to usable energy (ATP molecules) include glycolysis, the Krebs cycle (aerobic respiration) and anaerobic respiration, and oxidative phosphorylation. Together, these reactions are referred to as cellular respiration.

These are complex pathways, so expect to take some time to understand them. Refer to the figure as many times as necessary to understand what happens in cellular respiration. (Note: Alcohol fermentation is included for reference but does not occur in the human body.) 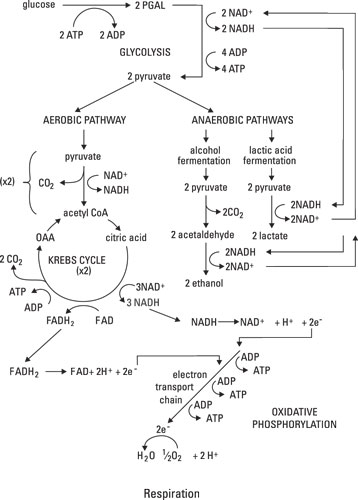 Cellular respiration: glycolysis, aerobic (Krebs cycle) and anaerobic respiration, and oxidative phosphorylation, all of which convert energy from fuel into ATP.

Starting at the top of the figure, you can see that glucose — the smallest molecule that a carbohydrate can be broken into during digestion — goes through the process of glycolysis, which starts cellular respiration and uses some energy (ATP) itself. Glycolysis occurs in the cytoplasm and doesn't require oxygen. Two molecules of ATP are required to start each molecule of glucose rolling down the glycolytic pathway; although four molecules of ATP are generated during glycolysis, the net production of ATP is two molecules. In addition to the two ATPs, two molecules of pyruvic acid (also called pyruvate) are generated. They move into a mitochondrion and enter the Krebs cycle.

The Krebs cycle is a major biological pathway in the metabolism of every multicellular organism. It's an aerobic pathway, requiring oxygen.

As the pyruvate enters the mitochondrion, a molecule called nicotinamide adenine dinucleotide (NAD+) joins it. NAD+ is an electron carrier (that is, it carries energy), and it gets the process moving by bringing some energy into the pathway. The NAD+ provides enough energy that when it joins with pyruvate, carbon dioxide is released, and the high-energy molecule NADH is formed. Flavin adenine dinucleotide (FAD) works in much the same way, becoming FADH2. The product of the overall reaction is acetyl coenzyme A (acetyl CoA), which is a carbohydrate molecule that puts the Krebs cycle in motion.

Cycles are endless. Products of some reactions in the cycle are used to keep the cycle going. An example is acetyl CoA: It's a product of the Krebs cycle, yet it also helps initiate the cycle. With the addition of water and acetyl CoA, oxaloacetic acid (OAA) is converted to citric acid. Then, a series of reactions proceeds throughout the cycle.

Oxidative phosphorylation, also called the electron transport chain (ETC), takes place in the inner membrane of the mitochondria. The electron carriers produced during the Krebs cycle — NADH and FADH2 — are created when NAD+ and FAD, respectively, are "reduced." When a substance is reduced, it gains electrons; when it's oxidized, it loses electrons. So NADH and FADH2 are compounds that have gained electrons, and therefore, energy. In the ETC, oxidation and reduction reactions occur repeatedly as a way of transporting energy. At the end of the chain, oxygen atoms accept the electrons, producing water. (Water from metabolic reactions isn't a significant contributor to the water needs of the body.)

As NADH and FADH2 pass down the respiratory (or electron transport) chain, they lose energy as they become oxidized and reduced, oxidized and reduced, oxidized and . . . . It sounds exhausting, doesn't it? Well, their energy supplies become exhausted for a good cause. The energy that these electron carriers lose is used to add a molecule of phosphate to adenosine diphosphate (ADP) to make it adenosine triphosphate — the coveted ATP. For each NADH molecule that's produced in the Krebs cycle, three molecules of ATP can be generated. For each molecule of FADH2 that's produced in the Krebs cycle, two molecules of ATP are made.

Theoretically, the entire process of aerobic cellular respiration — glycolysis, Krebs cycle, and oxidative phosphorylation — generates a total of 38 ATP molecules from the energy in one molecule of glucose: 2 from glycolysis, 2 from the Krebs cycle, and 34 from oxidative phosphorylation. However, this theoretical yield is never quite reached because processes, especially biological processes, are never 100 percent efficient. In the real world, usually around 29 to 30 ATP molecules per glucose molecule are expected.

Sometimes oxygen isn't present, but your body still needs energy. During these times, a backup system, an anaerobic pathway (called anaerobic because it proceeds in the absence of oxygen) exists. Lactic acid fermentation generates NAD+ so that glycolysis, which results in the net production of two molecules of ATP, can continue. However, if the supply of NAD+ runs out, glycolysis can't occur, and ATP can't be generated.

This occurs most often in muscle cells during periods of intense exercise. The byproduct of this reaction, lactic acid, builds up in the muscle, contributing to muscle fatigue (the inability of a muscle cell to contract). Thus, this process cannot be maintained for extended periods of time.