How a Human Kidney Works

In humans, the kidneys are the organs that produce urine. There are two kidneys, one on each side of your back, just below the ribs. Like most organs in the body, the function of the kidneys is closely tied to its structure.

Each kidney has three distinct areas:

Each kidney contains more than 1 million nephrons, which are microscopic tubules that make urine. Each nephron contributes to a collecting duct, which carries the urine into the renal pelvis. From there, the urine flows down the ureter, which is the tube that connects the kidney to the bladder.

Each of the million tiny nephrons in the kidney is a mass of even tinier tubules, as shown in the figure. The main part of the nephron consists of the proximal (near) and distal (far) convoluted tubules, which become the nephron’s collecting duct. 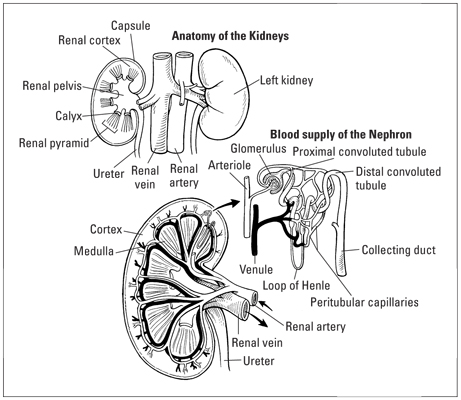 At the beginning of the proximal convoluted tubule is a ball-like structure made up of the glomerulus, which is the site where the nephron’s tubule intermingles with a capillary, and the glomerular capsule (also called Bowman’s capsule).

In the glomerulus, the transfer of waste products from the bloodstream takes place through the capillary wall into the tip of the proximal convoluted tubule. Also at this site, any materials that are filtered by the nephron and are to be returned to the bloodstream are reabsorbed from the glomerulus through the capillary wall so that they can be recirculated.

Venules (smallest veins) join the capillaries (smallest arteries), and together, they join the renal vein, which carries blood away from the kidney.

Urine is spurted from the ureter into the top of the bladder continuously. The bladder holds a maximum of about 1 pint of urine, but you begin to feel the need to urinate when it is only one-third full. When the bladder is two-thirds full, you start to feel really uncomfortable.

Urine leaves the body through the urethra, which is a tube at the bottom of the bladder that opens to the outside of the body. It is held closed by a sphincter muscle. When you want to start urinating, that sphincter muscle relaxes, opening the urethra and letting the urine flow out.