Explore Book Buy On Amazon
The 280 days, usually expressed as 40 weeks, are the human gestational period (length of pregnancy). This period is divided, again by convention, into three trimesters, though nothing specific marks the transition from one to the next.

Officially, by convention, Day 1 of a pregnancy is the first day of the woman's previous menstrual period. Obviously, she wasn't pregnant on that day, nor for numerous days thereafter. But it's easier to be sure about the start date of a menstrual period than about the day of ovulation or fertilization or implantation, so that's the custom that doctors follow. Then, by convention, doctors count ahead 280 days to arrive at the due date, the date on which, if all pregnancies and all babies were alike, the birth would take place.

Development during the first trimester

All the body's organs begin development in the first trimester. The cardiovascular system forms from small vessels in the placenta three weeks after fertilization. The heart begins to beat at this time as well.

At the end of the first trimester, the fetus is about 4 inches long (10 centimeters) and weighs about an ounce (28 grams). The head is large, and hair has begun to grow. The intestines are inside the abdomen, and the urinary system (kidneys and bladder) starts to work.

If you're counting weeks and feel you're losing track, remember that the trimesters of pregnancy are measured from Day 1 of the mother's last menstrual period. This date is around two weeks earlier than the date of fertilization. The embryonic stage is the second and third month of pregnancy.

Development during the second trimester

The fetus, with all its systems in place, continues programmed development in the second trimester. Ultrasound imaging shows the skeleton, head details, and external genitalia. Bone begins to replace the cartilage that formed during the embryonic stage. At the end of the second trimester, the fetus is about 12 to 14 inches (30 to 36 centimeters) long and weighs about 3 pounds (1.4 kilograms).

Development during the third trimester

The fetal development program speeds up in the third trimester. The fetus, with its systems developed, continues to grow in size. Subcutaneous fat is deposited, which serves as a critical energy reserve for brain and nervous system development.

Near the end of the third trimester, the fetus positions itself for birth, turns its head down, and aims for the exit. When the fetus's head reaches the ischial spines of the pelvic bones, the fetus is said to be engaged for birth. 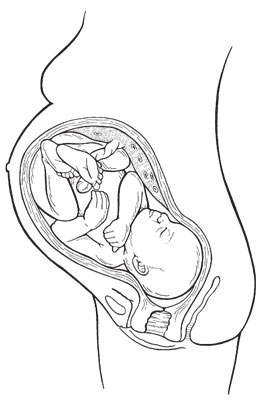 A fetus late in the third trimester.