Urban Innovation and Its Impact on Smart Cities

By: Jonathan Reichental and
Updated: 09-18-2020
From The Book: Smart Cities For Dummies 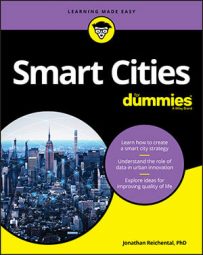 Explore Book Buy On Amazon
Urban innovation is a primary element of the smart city. However, that is often a term that gets thrown around with little understanding of how it truly impacts the development of a smart city. Since there is sometimes disagreement about the term innovation, so here are a couple of definitions to help you understand this topic: Okay, now let’s talk about water.

All living things on Planet Earth need water, and wherever you find water, you’ll find life. To survive, humans need regular access to drinking water. In their early nomadic times, as they wandered, they would need to find streams, rivers, and lakes. Later, when humans began to settle in small gathering places, they needed to be close to sources of water. Wells were dug into the water table, which provided a reliable water supply. Cisterns were created that gathered rainwater.

In other instances, where water was relatively close, it was transported by people carrying baskets and other containers on their backs or heads or in their hands. Later, animals were used to pull carts. In some parts of the world, water is still transported by humans and animals.

As human settlements grew, demand for water for drinking and agriculture also increased. Systems were required in order to bring larger volumes of water predictably from the source. To solve this problem, humans invented the aqueduct — an elaborate combination of tunnels, surface channels, canals, clay pipes, and bridges — to move water to wherever it was needed.

Aqueducts that covered short distances were used in the earliest days of civilization, beginning with the Minoans on Crete, over 4,000 years ago. More sophisticated, longer-distance systems were developed during the Assyrian Empire. Later, the Babylonians, the Greeks, and communities across Persia, Egypt, and China all constructed elaborate aqueduct systems, including communal drinking fountains.

Finally, it was the Romans who mastered the building of aqueducts. Ambitious projects overcame all kinds of difficult terrain, including engineering, to move water upward. Many forms of aqueduct construction could be seen across the Roman Empire. The water supplied not only all basic needs and agriculture but also large public baths, fountains, and private homes. Many remnants of these systems can still be seen, scattered across the landscape. 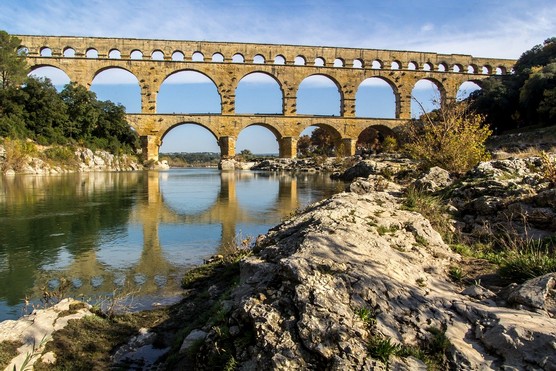 The Pont du Gard Roman aqueduct, in southern France, from the first century.

Aqueduct systems were essential for enabling communities to grow and thrive. In particular, major Italian cities such as Rome were able to prosper over the centuries because of the regular supply of water. Aqueduct engineering can be considered one of the most important urban innovations of its time. Human ingenuity brought to bear on a pressing and essential need resulted in nothing less than a transformation.

History is replete with these game-changing innovations in an urban context. Humans have solved many intractable issues over several thousand years (though many more remain to be solved). The results have been nothing less than miraculous, enabling them to design and build dense urban environments such as the greater area of Tokyo, Japan, which now is home to over 35 million residents.

Here’s a list of some of the most important urban innovations: Each one of these items, and many more (alone and together), has made cities smarter, and typically better, places to live.

Urban innovation now continues at an accelerated pace. In fact, you can’t separate this topic from the topic of smart cities. Urban innovation is largely driving the pace of change in cities.

Solving the problems of the world’s communities requires the participation of a wide range of stakeholders. It’s not possible for a local city agency to solve every issue: No single organization has the budget, time, or talent. The challenges are just too large, often regional, and highly diverse for any single entity to tackle.

Solving these challenges today requires a network of participants. Fortunately, a movement of urban innovators in cities all over the world are rolling up their sleeves and making things happen. Disparate stakeholders are joining forces to solve some of the world’s most intractable urban issues.

Urban innovation networks are clusters of various people and organizations who are connecting and collaborating on solving challenges. They’re interested in, and invested in, game-changing, new ideas, often (but not always) technologically driven. These networks are trying to make a difference in areas such as sustainability, transportation, inclusion, climate, governance, equity and equality, public safety, waste management, and more. Fundamentally, efforts have one large-scale focus: improving quality of life (QoL).

Here are just a few of the areas where participants in urban innovation networks come from:

The ways in which these disparate players connect and collaborate are as diverse as the cities and participants themselves. An urban innovation network can be a formal organization with a charter and rules or an ad hoc collection of entities that tap into each other’s skills and resources as necessary. It can be centralized by way of city hall or a motivated vendor. Universities have been particularly active in building out urban innovation networks, to tackle a single-focus issue or a suite of challenges.

Urban innovation networks reflect an acknowledgment that the world’s biggest urban problems will be solved when people work together. Done right, they are powerhouses for creating and sharing knowledge.

If humans are going to create cities that they aspire to live in, their future will be built on networks of motivated, empowered, and talented participants. Cities are now too complex and interdependent for any single entity to lead efforts alone. The best solutions won’t necessarily spring from government buildings (although a few will); instead, support and success for smart city efforts, powered by urban innovation, will come from entrepreneurship, the exchange of ideas, the synergy of resources, and the energy of a diverse community.

Solving today’s tough urban problems in the years ahead will require a variety of new approaches. Albert Einstein, the German-born physicist, is reported to have said, rightly, “We can’t solve problems by using the same kind of thinking we used when we created them.” To create urban innovation, we humans will need new, dedicated processes and talent to experiment and test original ideas and technologies.

One approach is the creation of urban innovation labs, which are entities tasked with developing leading-edge ideas for a city’s most intractable challenges. The labs are typically physical locations that support the experimentation, testing, and — assuming success —deployment of new solutions. They’re laboratories of urban innovation.

There’s no agreed-on blueprint for creating an urban innovation lab. The first step for a city is to agree that such a lab has value and then to either build one or collaborate with an external party in delivering its value.

Many cities create their own labs and house them in city-owned or -leased buildings. Others collaborate with private entities and universities that partner to provide capabilities as a service. Cities that support these labs share at least two common — and still quite rare — qualities: They have a higher tolerance for risk and are comfortable granting some autonomy and freedom to innovate to these innovation teams.

Urban innovation labs can work in alignment with smart city activities or they can be independent of those activities. Either way, their work is typically focused on pressing city issues. Their independence from the requirements to support core city functions gives them the flexibility to experiment and not be constrained by regular city operations. Regardless, the lab gets no free pass when it comes to abiding by all city rules and regulations.

To embrace urban innovation labs, cities must have a higher tolerance for risk. This is because innovation, by definition, is riskier. Specifically, innovators must be allowed to try strategies that have a higher likelihood of being unsuccessful. Being able to approach problems with this mindset increases the chance of a unique solution emerging and — in the case of a failure — creates continuous opportunities for learning.

Unlike in the private sector, where some amount of experimentation and failure is expected relative to advancing new, proposed products and services, the public sector isn’t historically predisposed to this approach. Public officials have an enormous obligation to be fiscally responsible when managing taxpayer funds, and, with so many priorities to serve a community, the appetite for risky bets is always low.

It’s fair to say that the proposal for an urban innovation lab is a hard sell. That’s why you don’t yet see many of them. But the tide is turning: A broader recognition that innovation is essential to solving the world’s greatest challenges is helping communities and city officials recognize the benefits of paying more attention to, and focusing on, processes that are game-changing. In addition, the success of urban innovation labs in several cities is providing good evidence for making the case for smart cities.

In developing an urban innovation lab, city leaders must emphasize the focus on experimentation, learning, and efficiency. Though these labs can exist independently of a smart city strategy, there appears to be important value in determining whether they can accelerate and improve the performance of smart city efforts. Aligning their goals may be a good approach for some agencies.

Mike Bloomberg, a former tech CEO and the former mayor of New York City, created the American Cities Initiative as part of his philanthropic efforts. Its purpose is to support US cities in responding to major challenges and moving them and the nation forward. It has these three key themes: A subset of the American Cities Initiative is support for the creation of innovation teams (or i-teams) to help cities achieve their goals. Recognizing some of the core challenges that cities face — dwindling budgets, increased citizen expectations, and evolving societal needs, just to name a few — Bloomberg Philanthropies funds i-teams to help city leaders drive bold innovation. The teams conduct qualitative and quantitative research to assess local conditions and then develop innovative solutions that are measured against goals.

These teams have had success in diverse areas, including helping mayors with economic development, customer service, and murder reduction. These teams are now providing value outside the US, from Canada to Israel and France. As of 2019, almost 20 cities were participating.

I-teams can be considered a temporary type of virtual urban innovation lab.