By: David Silverberg and Dennis Hastert and Tom Daschel and
Updated: 03-26-2016
From The Book: Congress For Dummies 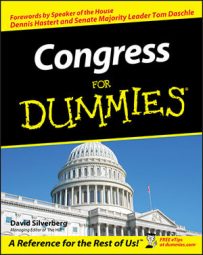 Usually when people refer lobbyists, they're talking about professionals, people who hire themselves out to clients to work on their behalf. Frequently, lobbyists started their careers either as members of Congress or as congressional staffers, leaving government service and then using their contacts on behalf of their clients. Some lobbyists base their business on a long-standing relationship with a single, powerful member of the House or Senate.

Full-time lobbyists spend their days influencing lawmakers and members of the executive branch to pursue particular courses of action or introduce, shape or alter pieces of legislation. The different kinds of lobbyists include the following:

All full-time professional lobbyists must register with Congress.

If you're simply on Capitol Hill on behalf of your own cause, you don't have to worry about registering, and you're completely free to talk to any representative or senator who wants to talk to you. Registration is necessary only when you accept payment from clients for whom you have lobbied.

As soon as you begin pursuing your particular cause, you become a special interest.

If you've come to Congress to get your particular idea or cause adopted, you're going to have to petition the government more effectively than your opponents. That's why effective lobbying is so important.

The country's founders assumed that conflict would occur among and between special interests, or factions, as they were referred to in the Federalist Papers. The Framers' idea was to have all the interests competing in a free and open marketplace of ideas. They also thought that sensible people would choose the best ideas among them. In a system that made the right to petition government one of its fundamental precepts, there could be no other result.

By a faction, I understand a number of citizens, whether amounting to a majority or minority of the whole, who are united and actuated by some common impulse of passion, or of interest, adverse to the rights of other citizens, or to the permanent and aggregate interests of the community. — James Madison, writing as "Publius" in Federalist No. 10, appearing Nov. 23, 1787, in The New York Packet.

As James Madison noted, people always divide into factions for a wide variety of reasons. Because the causes of factionalism cannot be prevented, the only thing the government can do is control its effects and make sure that factionalism never becomes destructive.

David Silverberg is Managing Editor and a columnist at The Hill, a weekly newspaper that covers Congress.