How the Electoral College Affected the 2000 and 2016 Elections 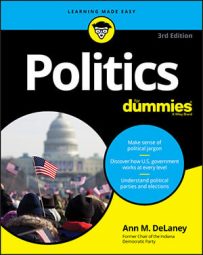 To understand what happened in these elections, you need to understand the way the system of electing a U.S. president and vice president works. The following table lists the states that President George W. Bush won in 2000 and the electoral votes those states brought to his total:

Al Gore’s populist campaign won the Northeast, except for New Hampshire. He also won the West Coast and split the Midwestern states with George W. Bush. Gore carried population centers, whereas Bush was more popular in rural areas. The following minitable lists the states that Al Gore won in 2000 and their electoral votes: If the 2000 election had been about who had greater support in the most square miles of the country, George Bush (and, in 2016, Donald Trump) would have been the winner by a long shot. (In the 2000 election, Bush won 2,463 counties, compared to Gore's 675.) If the election had been about who won the greatest number of votes, regardless of where they’re located, Al Gore (and, in 2016, Hillary Clinton) would have been declared the winner. 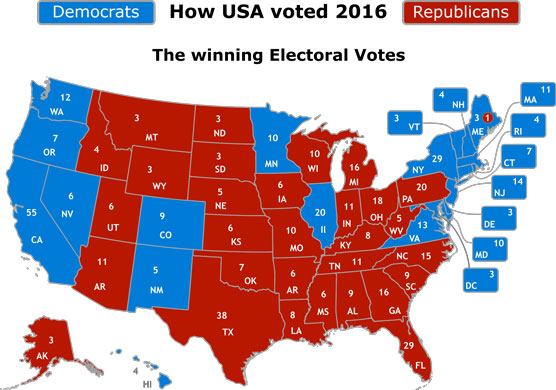 Al Gore’s margin of victory in the popular vote was 3 percent. That may not seem like much, but it’s much larger than other presidential contests have had. In 1960, John Kennedy defeated Richard Nixon by 303 to 219 electoral votes. Even though the electoral votes weren’t close in 1960, Kennedy defeated Nixon by only 112,881 popular votes. Kennedy’s margin of victory was only one-tenth of 1 percent.

George W. Bush didn’t win the popular vote, and his electoral vote margin was razor thin, but he did carry 30 of the 50 states. Part of the original justification for the creation of the electoral college was to guarantee that a successful presidential candidate must build a broad base of support around the country — and Bush did that.

In the 2016 presidential election, the margin of victory in the electoral college was much larger. Donald Trump received 33 more electoral votes than George W. Bush and carried one more state. What is remarkable is how much larger the popular vote was for the losing candidate. How did a candidate fail to be elected when she received almost 3 million more votes?

The answer is that the United States elects its president and vice president indirectly, by way of the electoral college.

Changing the electoral college requires either a constitutional amendment passed by a two-thirds vote of Congress and ratification by three-quarters of the state legislatures or action in all 50 states. Given that seven small states would see their electoral impact diminished by change, it would be difficult to pass. Approximately 700 bills have been introduced in Congress over the last 200 years to change the electoral college and none has succeeded.

The smaller states also realize that changing the electoral college could open discussion about the disproportional weight given to states with smaller populations in the Senate. For example, Wyoming routinely casts a little more than one-quarter of a million votes for presidential candidates in the general election, and New York casts more than 30 times that number. Both states have two, and only two, senators in the U.S. Senate. In other words, the vote of a voter in New York for senator is worth 1/30 of the vote of a voter from Wyoming — or North Dakota, Alaska, Montana. . . . You get the picture.

Despite the fact that smaller states are in a position to essentially block electoral college reform, you'll still find proposals put forward that are meant to change the way Americans elect their presidents. One proposal involves direct election with instant-runoff voting, or IRV. Voters would rank their choices in order of preference. Ballots are counted for each voter’s first choice. If a candidate gains a majority, that candidate wins. If no candidate receives a majority, the candidate with the fewest votes is eliminated. The voters who selected the losing candidate as their first choice then have their votes added to the total of their next choice. This continues until a candidate has a majority. This system is used in several countries and in the state of Maine for congressional elections.

The other alternative to the electoral college is quite in line with the U.S. system of democracy. Rather than use the electoral college, people simply vote for candidates, and whoever gains a majority wins. Sounds simple, right? Not quite. Because this system allows multiple candidates to run, one candidate may have a difficult time getting more than 50 percent of the national vote. If a majority were required for election, runoff elections would then have to be held between the top vote-getting candidates from the first race, or instant-runoff voting would need to be implemented because the cost and difficulty of having more than one national election every four years might be prohibitive.

Sixteen states have signed on to NVIP. This compact is an agreement by these states to cast their electoral votes for the candidate who wins the popular vote nationwide. This compact has one caveat: The total number of electoral votes belonging to states that join the compact must surpass 270 — the number needed for victory — if it is to take effect. With the addition of Oregon in June 2019, the total electoral votes for states signing is 196, or about 75 votes short of the total needed to activate the compact. All the states that have signed the compact are Democratic states that voted for the losing Democratic candidates in 2000 and 2016.