Types of Shots in Filmmaking and How to Frame Them

By: Nick Willoughby and
Updated: 11-17-2022
From The Book: Digital Filmmaking For Kids For Dummies

Explore Book Buy On Amazon
In this video, you learn about the rule of thirds for framing digital video shots and gain a better understanding of the types of shots in filmmaking you can take from extreme wide shots to extreme close-ups. The rule of thirds, although not a rule that can't be broken in filmmaking, is all about how to frame a shot or where to place the subject in the scene.

When taking shots in filmmaking, you have several types to choose from, depending on how far away or close you want the subject to appear in your digital film. A wide shot, also known as a long shot, shows more of the surrounding scenery or a wider view. A mid shot or medium shot is commonly used for television shows and is good for showing hand movements and facial expressions. A close-up is great for capturing facial expressions and emotions in your digital film. Close-ups, like the one in the video, often show just a subject's face. Extreme close-ups in filmmaking show strong emotions and fine details (like wrinkles or skin flaws).

How to use the rule of thirds in digital filmmaking

Framing shots for your digital film is not just about pointing a camera at a subject and pressing a button. You should take time to consider the best way to frame your shot — every shot — because doing so will always pay off in the final edit.

The rule of thirds is one of the most basic and important rules to remember when shooting your film. It’s not really a “rule” in the strict sense, and you won’t be arrested for not using it, but it does make your shots look better.

Each of the images below is an identical shot of one of our actors. The second frame has been divided into thirds, horizontally and vertically: three sections across and three sections down. This is where you get rule of thirds from.

Using the rule of thirds. 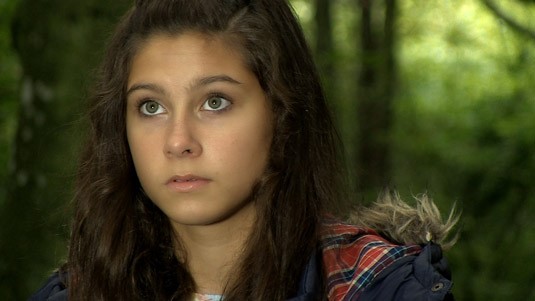 Bad framing can distract your audience.

Using the rule of thirds is like riding a bike: It takes practice. If you use the rule of thirds often enough, framing shots this way will become natural to you, and you’ll be able to do it easily in your filmmaking without thinking about it.

Next time you watch a movie, look out for the ways the director uses the rule of thirds. Sometimes you can spot moments in films where the director intentionally breaks the rule of thirds to make the shot feel awkward. (Just make sure you spot these moments quietly. Constantly pointing out awkward shots may annoy your family or friends.)

Types of shots in filmmaking

The beauty of digital filmmaking is that you can move your camera around and change your shot types throughout a scene. Choosing the right type of shots for your film can enhance a scene’s look and build emotions and mood. Be sure to take time in choosing your shots.

A wide shot, also known as a long shot, shows your audience more of the scene you are filming. You do this by zooming out on your camera or by simply moving your camera farther away from your subject or character. Here is a wide shot; next to it is the same shot with a grid superimposed on it so you can see how it was framed using the rule of thirds. As you can see, the actor’s head is framed in the top left.

Some filmmakers like to start their scenes with a wide shot. When a wide shot is used this way, it’s called an establishing shot, and is used to show more of the location surrounding the subject or characters in your scene. Imagine you’re filming a scene, and you want your audience to know that your characters are on a beach. One way to do this in your filmmaking is to begin the scene with a wide shot showing your characters, the sky, the sea, and the sand. Instantly your audience knows the characters are on a beach.

When framing a shot, look out for any straight lines you can find, either horizontally or vertically across the shot. Use these lines to keep your framing straight. For instance, the shot above is framed so that the horizontal line of the shot follows the line where the grass meets the trees.

An extreme wide shot is filmed even farther away from your subject or character — in fact, sometimes they’re not even visible in the shot. This shot is great was for filmmakers to introduce the location of your scene.

Get more with an extreme wide shot.

Often blockbuster movies establish the location of a scene by using an extreme wide shot that includes landmarks, buildings, or sights that the audience will recognize.

Shooting a mid shot in your film

The mid shot or medium shot frames the characters from a space above their heads to a point roughly midway down their bodies. This shot is the most commonly used shot on TV and film because it’s great for capturing hand movements, gestures, and facial expressions. Here’s a mid shot taken from a DVD series.

A mid shot for your digital film.

The mid shot is used a lot in news reports because it focuses the audience’s attention on the upper‐half of the bodies of your characters. Because the viewpoint of a mid shot is similar to your own viewpoint when you’re having a conversation with someone, it’s also the most natural‐looking shot for an audience to watch. It’s a great shot to use for conversations and dialogue with small groups of people.

A two shot is a mid shot used to film two characters together.

A two shot is often used in TV when two presenters host a show. It can be used when you have two characters side by side sitting together or walking, or when they’re face to face at a dinner table or having coffee.

Over-the-shoulder shots also can be used within close‐up shots to capture more expression from your character and to build emotion.

Build emotion with your shots. 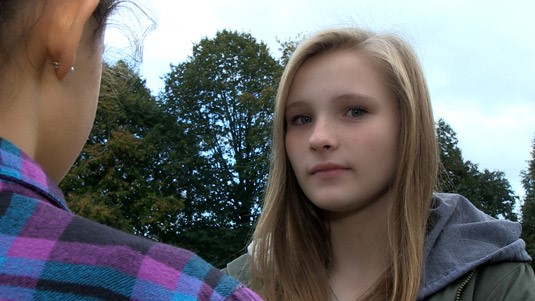 See what happens when an actor looks at the camera?

See what happens when an actor looks at the camera?

Shooting a close‐up shot in your film

Bringing the camera closer or zooming into your subject or character creates a close‐up shot.

A close‐up shot is a great way to show a character’s facial expressions, which can help build emotions in your film. Directors normally use close‐ups in scenes to show how a character is feeling. This degree of detail is hard to get with a wide shot or mid shot.

Because close‐up shots convey so much detail on the actor’s face, these shots can allow actors to express subtle emotions.

Which emotions do you see here?

You can use an extreme close‐up for any shot in your film that requires a lot of detail. For example, if you want to show the object that your character has in his hand, you could use a cut‐in to an extreme close‐up shot of that object. A cut‐in is a close‐up shot used to show detail on an object or on a part of the subject already visible in the main scene. In this scene, it is important that the audience see the key being passed from one character to another.