What Is Music Theory?

By: Michael Pilhofer and
Updated: 10-10-2019
From The Book: Music Theory For Dummies

Explore Book Buy On Amazon
One of the most important things to remember about music theory is that music came first. Music existed for thousands of years before theory came along to explain what people were trying to accomplish when pounding on their drums.

So, don’t ever think that you can’t be a good musician just because you’ve never taken a theory class. In fact, if you are a good musician, you likely already know a lot of theory. You simply may not know the terminology or technicalities. 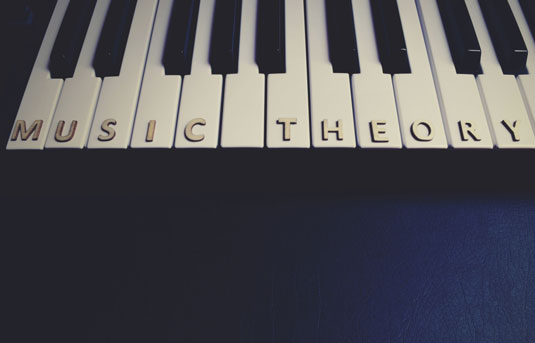 The concepts and rules that make up music theory are much like the grammatical rules that govern written language (which also came along after people had successfully discovered how to talk to one another). Just as being able to transcribe language made it possible for people far away to “hear” conversations and stories the way the author intended, being able to transcribe music allows musicians to read and play compositions exactly as the composer intended.

Learning to read music is a lot like learning a new language, to the point where a fluent person can “hear” a musical “conversation” when reading a piece of sheet music.

Plenty of people in the world can’t read or write, but they can still communicate their thoughts and feelings verbally just fine. In the same way, plenty of intuitive, self-taught musicians have never learned to read or write music and find the whole idea of learning music theory tedious and unnecessary. However, just like the educational leaps that can come with learning to read and write, music theory can help musicians master new techniques, perform unfamiliar styles of music, and develop the confidence they need to try new things.

From what historians can tell, by the time the ancient world was beginning to establish itself — approximately 7000 B.C. — musical instruments had already achieved a complexity in design that would be carried all the way into the present. For example, some of the bone flutes found from this time period are still playable, and short performances have been recorded on them for modern listeners to hear.

Similarly, pictographs and funerary ornaments have shown that by 3500 B.C., Egyptians were using harps as well as double-reed clarinets, lyres, and their own version of the flute. By 1500 B.C., the Hittites of northern Syria had modified the traditional Egyptian lute/harp design and invented the first two-stringed guitar, with a long, fretted neck, tuning pegs at the top of the neck, and a hollow soundboard to amplify the sound of the strings being plucked.

A lot of unanswered questions remain about ancient music, such as why so many different cultures came up with so many of the same tonal qualities in their music completely independent of one another. Many theorists have concluded that certain patterns of notes just sound right to listeners, and certain other patterns don’t. Music theory, then, very simply, could be defined as a search for how and why music sounds right or wrong. In other words, the purpose of music theory is to explain why something sounded the way it did and how that sound can be made again.

Many people consider ancient Greece to be the actual birthplace of music theory, because the ancient Greeks started entire schools of philosophy and science built around dissecting every aspect of music that was known then. Even Pythagoras (the triangle guy) got into the act by creating the 12-pitch octave scale similar to the one that musicians and composers still use today. He did this via the first Circle of Fifths, a device still religiously used by musicians from all walks of life.

Another famous Greek scientist and philosopher, Aristotle, is responsible for many books about music theory. He began a rudimentary form of music notation that remained in use in Greece and subsequent cultures for nearly a thousand years after his death.

In fact, so much music theory groundwork was laid in ancient Greece that substantial changes didn’t seem necessary until the European Renaissance nearly 2,000 years later. Neighbors and conquerors of Greece were all more than happy to incorporate Greek math, science, philosophy, art, literature, and music into their own cultures.

While it would be nice to be one of those people who can sit at any instrument and play beautiful music without any training whatsoever, most folks need some sort of structured instruction, whether from a teacher or from reading a book. Here, we go over the basic information you need to start learning how to read music, play scales, understand key signatures, build chords, and compose with forms.

The foundation: Notes, rests, and beats

Learning how to read music is essential to a musician, especially one who wants to share his music with other musicians or discover what other musicians are playing. By studying the basic elements, such as time values of each type of written note, musical rests, time signatures, and rhythm, you put yourself on the path to mastering music. All these elements come together to establish a foundation that allows you to read, play, and study music.

Reading musical notes on both the treble and bass clef staves as well as finding notes on the piano and guitar — the two most common instruments on which people teach themselves to play — are crucial to making and studying music.

When you can read notes on the staves, you can determine a musical piece’s key signature, which is a group of symbols that tells you what key that song is written in. You can use the Circle of Fifths to help train yourself to read key signatures on sight by counting the sharps or flats in a time signature.

After you’ve become familiar with key signatures, you’re ready to move on to intervals, chords, and chord progressions, which create the complexity of musical sound — from pleasing and soothing to tense and in need of resolution. You build scales and chords using simple or compound intervals: melodic and harmonic.

Linking the keyboard to music notation

Prior to the Renaissance period, few truly innovative changes occurred in music technology. Stringed instruments, woodwinds, horns, and percussion instruments had been around for thousands of years, and although they had experienced many improvements in design and playing technique, they were essentially the same instruments used by the people of ancient cultures. It wasn’t until the 1300s that a new musical interface appeared: the keyboard.

Fifteenth-century French composers began adding as many lines as they needed to their musical staves. They also wrote music with multiple staves to be played simultaneously by different instruments. Because the keyboard has so many notes available, separate staves for left- and right-handed playing began to be used. These staves are the bass clef and the treble clef.

Keyboards also had the advantage of being incredibly easy to build chords on. By the 17th century, the five-lined staff was considered standard for most musical instrumentation — probably because it was easier and cheaper to print just one kind of sheet music for musicians to compose on. The system hasn’t changed much over the past four centuries, and it probably won’t change again until a new, more-appealing instrument interface enters the scene.

Most popular and classical music is composed using specific forms. A form is a structural blueprint used to create a certain type of music. The building blocks of form include musical phrases and periods, and rhythm, melody, and harmony enter the picture to create the genre, or style, of a piece of music.

When sitting down to write music, you have to choose what form you’re going to follow; for example, classical or popular. You can choose from many different classical and popular forms, including sonatas, concertos, 16-bar blues, and verse-chorus form. You can create varied sound in whatever form you choose by playing with tempo, dynamics, and instrument tone color.

How theory can help your music

If you didn’t know better, you may think that music was something that could start on any note, go wherever it wanted, and stop whenever the performer felt like getting up for a glass of iced tea. Although it’s true that many folks have been to musical performances that actually do follow this style of “composition,” for the most part these performances are confusing and annoyingly self-indulgent and feel a little pointless.

The only people who can pull off a spontaneous jam well are those who know music thoroughly enough to stack chords and notes next to one another so they make sense to listeners. And, because music is inherently a form of communication, connecting with your listeners is the goal.

Getting to know more about music theory is also incredibly inspiring. Nothing can describe the feeling you get when the light bulb goes off in your head and you suddenly realize you can put a 12-bar blues progression together and build a really good song out of it. Or when you can look at a piece of classical music and find yourself looking forward to playing through it for the first time. Or the first time you sit down to jam with your friends and find you have the confidence to take the lead.

As a musician, the inescapable fact is this: What you get out of music is what you put into it. If you want to be able to play classical music, you must know how to sight-read and know how to keep a steady beat. If you plan to become a rock guitarist, knowing what notes you need to play in a given key is especially important. Knowing how to play music takes a lot of personal discipline, but in the end, it’s worth all the hard work. Plus, of course, playing music is fun, and knowing how to play music well is incredibly fun. Everybody loves a rock star/jazz man/Mozart.