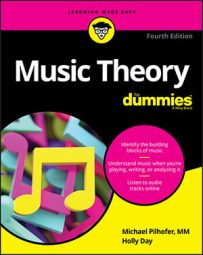 Explore Book Buy On Amazon
Simple time signatures are the easiest to count, because a one-two pulse in a piece of music feels the most natural to a listener and a performer. The following four requirements indicate that a time signature is a simple one: 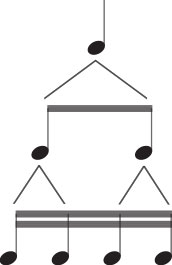 Each level of this tree equals every other layer, and multiple notes within a beat are always grouped together to equal one beat.

The following sections explain how to use measures to count in simple time and provide you with some counting practice.

Measures (or bars) help performers keep track of where they are in a piece of music and help them play the appropriate beat. In simple time, the measure is where the true rhythm of a piece of music can be felt, even if you’re just reading a piece of sheet music without playing it.

In simple time, a slightly stronger accent is placed on the first beat of each measure.

Here are some common examples of simple time signatures (some of which we describe in the following sections):

When you see a line of music that has a 4/4 time signature like the one in the following figure, the beat is counted off like this:

A time signature of 4/4 satisfies the requirements of simple time.

Because 4/4 time is so often used in popular types of music, it’s frequently referred to as common time. In fact, instead of writing “4/4” for the time signature, some composers just write a large “C” instead.

If the time signature of a line of music is 3/4, as in the following figure, the beat is counted like this:

A time signature of 3/4 satisfies the requirements of simple time.

If the time signature is 3/8, the first note in the measure— whatever it may be — gets a slight stress. In this figure, that first note is an eighth note.

A time signature of 3/8 satisfies the requirements of simple time.

You count out the beat of the music shown in the figure like this:

The time signatures 3/8 and 3/4 have almost exactly the same rhythm structure in the way the beat is counted off. However, because 3/8 uses eighth notes instead of quarter notes, the eighth notes get the beat.

If the time signature of a line is 2/2, also called cut time, the half note gets the beat. And because the top number determines that the measure contains two beats, you know that each measure has two half notes, as shown.

In 2/2 time, the half note gets the beat, and each measure contains two beats.

You count the music in the figure like this:

ONE two ONE two

Time signatures with a 2 as the lower number were widely used in medieval and pre-medieval music. Music from this period used a rhythm structure, called a tactus — later called a minim — that was based on the rhythm pattern of a human heartbeat.