How to Play Left Hand Accompaniment Patterns on the Piano

Scales and melodies are fine material for the left hand, but they aren’t Lefty’s main gig. Rather, on the piano, your left hand begs to be playing accompaniment patterns while your right hand noodles around with a melody or some chords. One of the most user-friendly left-hand patterns is the arpeggio.

In addition to pizza, rigatoni, and ciao, the other Italian word that should be part of your everyday vocabulary is arpeggio. The word translates to “harp-like,” which means absolutely nothing to piano players. However, after many years of bad translations, musicians have come to understand this word as meaning “a broken chord.”

Well, nothing’s really broken about an arpeggio — it works great. You simply play the notes of a chord one at a time, rather than all at once.

Three-note patterns may be the easiest and most versatile left-hand accompaniment to play, and they conform to the hand really nicely, too. For example, place your left hand on the keys in C position with LH 5 on C, LH 2 on G above that, and LH 1 on middle C. Fits like a glove, right?

The three notes you use for this pattern are the root, fifth, and top notes of the appropriate scale. Using the C major scale, for example, the notes are C, G, and C. 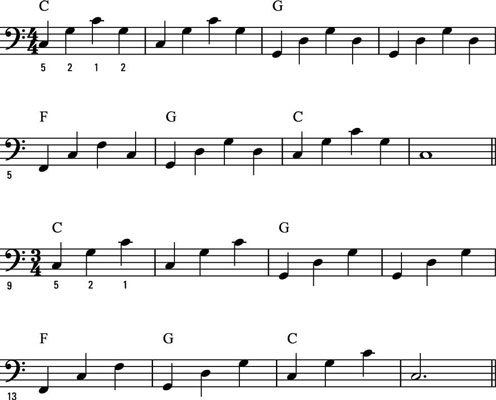 Play the three-note pattern using eighth notes for a more energetic, faster arpeggio. You play a full set of root-fifth-top-fifth for every two beats, so that beats 1 and 3 of every measure start again on the root note of the arpeggio. Gently rock your left hand back and forth over the keys until you feel this pattern is second nature to you.

These eighth notes in 3/4 meter are slightly different: You can play all six eighth notes in a pattern or modify the pattern to give you time to move to other positions. 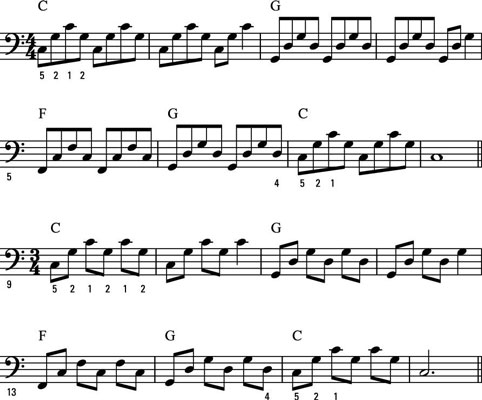 Adding another note to the three-note pattern gives you enough notes to make a major or minor chord. For this arpeggio, you add the third note of the scale. The four-note major arpeggio uses the root, third, fifth, and top notes of the scale.

As with the three-note arpeggios, different meters allow you some rhythmic options. Using quarter notes in 4/4 meter, you play up — root, third, fifth, top — once in each measure. Each subsequent measure begins again with the root note. For 3/4 meter, you play up in one measure — root, third, fifth — and hit the top note before coming down in the next measure — top, fifth, third.

Take a gander at the quarter-note patterns. Call out the name of each note as you play; hearing yourself helps you recognize the notes.

Try the alternate fingerings, shown in parenthesis below the suggested fingerings. Every hand is different, and you may find one of these is more comfortable than the other. 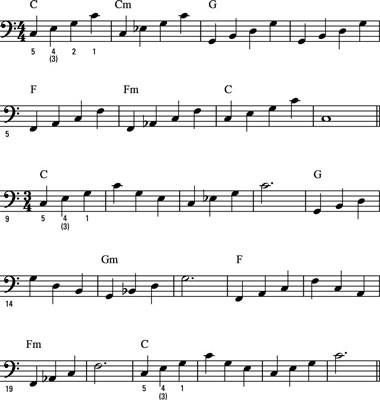 With an eighth-note rhythm, you can have lots of fun exploring different patterns for the four arpeggio notes. Just keep the correct four notes of each scale in mind — root, third, fifth, and top — and play two of them for every beat in the measure.

Check here to see some of these accompaniment patterns in action.