How to Compare Two Population Proportions

Explore Book Buy On Amazon
For statistical purposes, you can compare two populations or groups when the variable is categorical (smoker/nonsmoker, Democrat/Republican, support/oppose an opinion, and so on) and you’re interested in the proportion of individuals with a certain characteristic, such as the proportion of smokers.

Stating in H0 that the two proportions are equal is the same as saying their difference is zero. If you start with the equation p1 = p2 and subtract p2 from each side, you get p1 – p2 = 0. So you can write the null hypothesis either way.

is the proportion in the first sample with the characteristic of interest,

is the proportion in the second sample with the characteristic of interest,

is the proportion in the combined sample (all the individuals in the first and second samples together) with the characteristic of interest, and z is a value on the Z-distribution. To calculate the test statistic, do the following:

To interpret the test statistic, look up your test statistic on the standard normal (Z-) distribution (see the below Z-table) and calculate the p-value; then make decisions as usual. 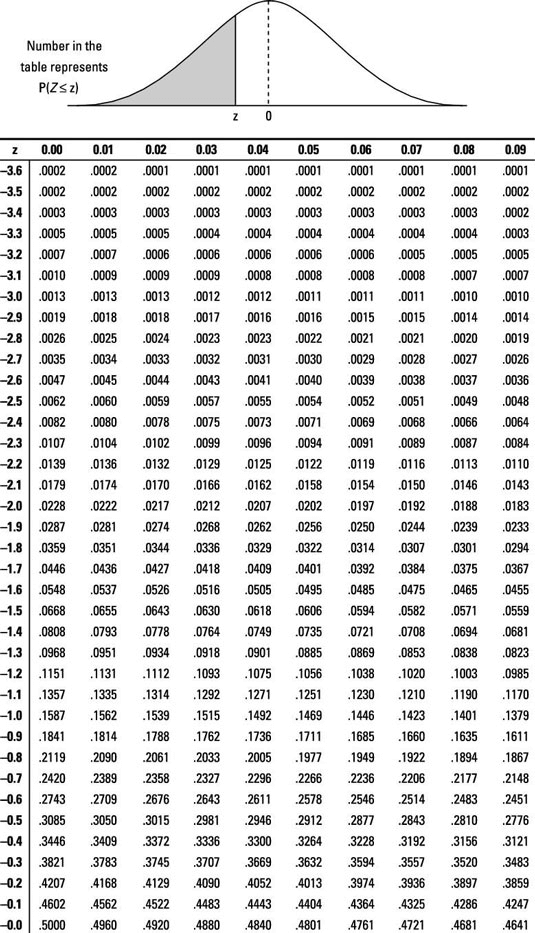 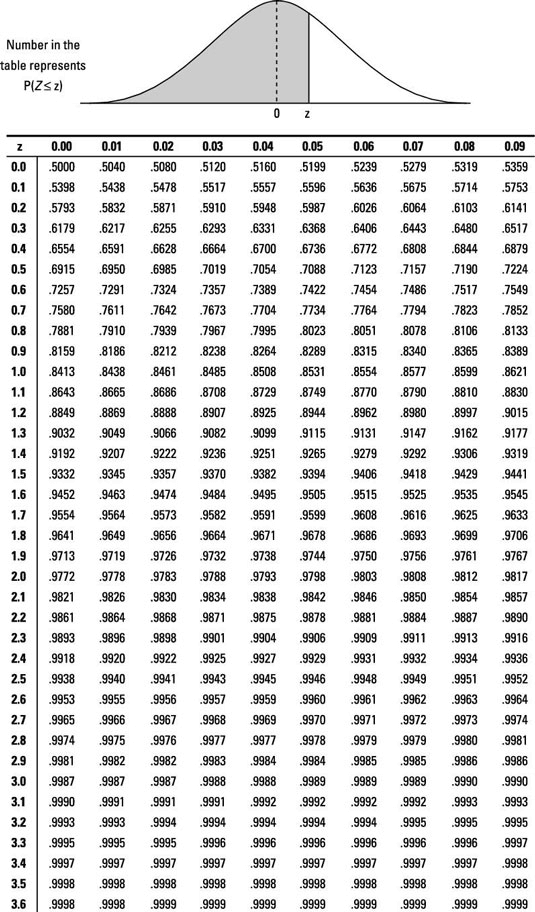 For example, the makers of Adderall, a drug for attention deficit hyperactivity disorder (ADHD), reported that 26 of the 374 subjects (7 percent) who took the drug experienced vomiting as a side effect, compared to 8 of the 210 subjects (4 percent) who were on a placebo (fake drug). Note that patients didn’t know which treatment they were given.

In the above study, a larger percentage of the people on the drug experienced vomiting, but is this percentage enough to say that the entire population on the drug would experience more vomiting? You can test it to see.

Why does Ha contain a “>” sign and not a “<” sign? Ha represents the scenario in which those taking Adderall experience more vomiting than those on the placebo — that’s something the FDA (and any candidate for the drug) would want to know about.

But the order of the groups is important, too. You want to set it up so the Adderall group is first, so that when you take the Adderall proportion minus the placebo proportion, you get a positive number if Ha is true. If you switch the groups, the sign would have been negative.

Now calculate the test statistic: The p-value is the probability of being at or beyond (in this case to the right of) 1.60, which is 1 – 0.9452 = 0.0548. This p-value is just slightly greater than 0.05, so, technically, you don’t have quite enough evidence to reject H0. That means that according to your data, vomiting is not experienced significantly more by those taking this drug when compared to a placebo.

You might ask, “Hey, the difference in the sample proportions is 0.032 which shows that the drug induces more vomiting than the placebo. Why did the hypothesis test reject H0 since 0.032 is obviously greater than 0?” In this case, 0.032 is not significantly greater than 0. You also need to factor in variation using the standard error and the normal distribution to be able to say something about the entire population of patients.