10 Steps to a Better Math Grade with Statistics

By: Deborah J. Rumsey and
Updated: 08-23-2019
From The Book: Statistics Workbook For Dummies with Online Practice 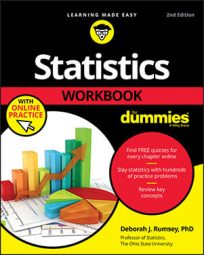 Explore Book Buy On Amazon
Statistics and math are very different subjects, but you use a certain amount of mathematical tools to do statistical calculations. Sometimes you can understand the statistical idea but get bogged down in the formulas and calculations and end up getting the wrong answer. Avoid making the common math mistakes that can cost you points on homework and exams. Read on to increase your confidence with the math tools you need for statistics.

The most basic math symbols are +, –, ∙ (multiplication), and / (division); but have you ever seen the following sign?

It means plus or minus and indicates a lower bound and an upper bound for your answer. Other commonly used math symbols involve the Greek letter “capital” sigma, which stands for summation.

In math formulas, you often leave out the multiplication sign; for example, 2x means 2 × x.

If you come across a math symbol that you don’t understand, ask for help. You can never get comfortable with that symbol until you know exactly what you use it for and why. You may be surprised that after you lift the mystique, math symbols aren’t really as hard as they seem to be. They simply provide you with a shorthand way of expressing something that you need to do.

Remember that squaring a number means multiplying it by itself two times, not multiplying by two. And taking the square root means finding the number whose square gives you your result; it doesn’t mean dividing the number by 2. Using math notation, x2 means square the value (so for x = 3, you have 32 = 9); and

Every fraction contains a top (numerator) and a bottom (denominator). For example, in the fraction 3/7, 3 is the numerator and 7 is the denominator. But what does a fraction really mean? It means division. The fraction 3/7 means take the number 3 and divide it by 7.

A common mistake is to read fractions upside down in terms of what you divide by what. The fraction 1/10 means 1 divided by 10, not 10 divided by 1. If you can hold on to an example like this that you know is correct, it can stop you from making this mistake again later when the formulas get more complicated.

Obey the order of operations

To remember the letters in PEMDAS for the order of operations, try this: “Please Excuse My Dear Aunt Sally.”

Suppose, for example, that you need to calculate the following:

First, calculate what’s in parentheses. You can either type it just as it looks into your calculator or do

Rounding errors can seem small, but they can really add up — literally. Many statistical formulas contain several different types of operations that you can do either all at once, using parentheses properly, or separately, as many students elect to do. Doing the operations separately and writing them down with each step is fine, as long as you don’t round off numbers too much at each stage.

For example, suppose that you have to calculate

You want to write down each step separately rather than calculate the equation all at once. Suppose that you round off to one digit after the decimal point on each calculation. First, you take the square root of 200 (which rounds to 14.1), and then you take 5.2 divided by 14.1, which is 0.369; you round this to 0.4. Next, you take 1.96 times 0.4 to get 0.784, which you round to 0.8. The actual answer, if you do all the calculations at once with no rounding, is 0.72068, which safely rounds to 0.72. What a huge difference! What would this difference cost you on an exam? At worst, your professor would reject your answer outright, because it strays too far from the correct one. At best, he would take off some points, because your answer isn’t precise enough.

Don’t round off too much too soon, especially in formulas where many calculations are involved. Your best bet is to use parentheses and use all the decimal places in your calculator. Otherwise, keep at least two significant digits after the decimal point until the very end.

Get comfortable with statistical formulas

Don’t let basic math and statistical formulas get in your way. Think of them as mathematical shorthand. Suppose that you want to find the average of some numbers. You sum the numbers and divide by n (the size of your data set). If you have only a few numbers, writing out all the instructions is easy, but what if you have 1,000 numbers? Mathematicians have come up with formulas as a way of saying quickly what they want you to do, and the formulas work no matter the size of your data set. The key is getting familiar with formulas and practicing them.

Stay calm when formulas get tough

Suppose that you encounter a formula that’s a little complicated? How do you remain calm and cool? By starting with small formulas, learning the ropes, and then applying the same rules to the bigger formulas. That’s why you need to understand how the “easy” formulas work and be able use them as formulas; you shouldn’t just figure them out in your head, because you don’t need the formula in that case. The easy formulas build your skills for when things get tougher.

You can also take this same function and plug in any value for y to get its corresponding value for x. For example, suppose that you have y = 2x + 3, and you’re given y = 4 and asked to solve for x. Plugging in 4 for y, you get 4 = 2x + 3. The only difference is, you normally see the unknown on one side of the equation and the number part on the other. In this case, you see it the other way around. Don’t worry about how it looks; remember what you need to do. You need to get x alone on one side, so use your algebra skills to make that happen. In this case, subtract 3 from each side to get 4 – 3 = 2x, or 1 = 2x. Now divide each side by 2 to get 0.5 = x. You have your answer.

You can use a formula in many different ways. If you have all the other pieces of information, you can always solve for the remaining part, no matter where it sits in the equation. Just keep your cool and use your algebra skills to get it done.

Certain commonly used functions have names. For example, an equation that has one x and one y is called a linear function, because when you graph it, you get a straight line. Statistics uses lines often, and you need to know the two major parts of a line: the slope and the y-intercept. If the equation of the line is in the form y = mx + b, m is the slope (the change in y over change in x), and b is the y-intercept (the place where the line crosses the y-axis). Suppose that you have a line with the equation y = –2x – 10. In this case, the y-intercept is –10, and the slope is–2.

Know when your answer is wrong

You should always look at your answer to see whether it makes sense, in terms of what kind of number you expect to get. Can the number you’re calculating be negative? Can it be a large number or a fraction? Does this number make sense? All these questions can help you catch mistakes on exams and homework before your instructor does.

You see the instructions “Show your work!” on your exams, and your instructor harps and harps on it, but still, you don’t quite believe that showing your work can be that important. Take it from a seasoned professor, it is. Here’s why:

Here’s another typical situation. A teacher looks at two papers, both with the right answer. One person wrote out all the steps, labeled everything, and circled the answer, but the other person simply wrote down the answer. Do you give both people full credit? Some teachers do, but many don’t. Why? Because the instructor isn’t sure whether you did the work yourself. Teachers don’t typically advocate doing math “in your head.” We want you to show your work, because someday, even for you, the formulas will get so complicated that you can’t rely on your mind alone to solve them. Plus, you do need to show evidence that the work is your own.

What if you write down the answer, and the answer is wrong, but only a tiny little mistake led to the error? With no tracks to show what you were thinking, the teacher can’t give you partial credit, and the littlest of mistakes can cost you big time.

Here’s a great way to work a math-related statistics problem:

The biggest argument students give for not showing their work is that it takes too much time. Yes, showing your work takes a little more time in the short run. But showing your work actually saves time in the long run, because it helps you organize your ideas clearly the first time, cuts down on the errors you make the first time around, and lessens your need to have to go back and double check everything at the end. If you do have time to double-check your answers, you have an easier time seeing what you did and finding a potential mistake. Showing your work is a win-win situation. Try showing your work a little more clearly, and see how it impacts your grades.