How to Solve a Triangle When You Know Two Angle Measures

If you know two angle measures and a side length on a triangle, you can use the Law of Sines to find the missing parts of the triangle. In this case, you need to know either two angles and the side in between them (angle-side-angle, or ASA), or two angles and a consecutive side (angle-angle-side, or AAS).

Whenever you're given two angles, you can find the third one immediately and work from there. In both of these cases, you can find exactly one solution for the triangle in question.

An ASA triangle means that you're given two angles and the side between them in a problem. For example, a problem could state that

as shown in the figure. You also could be given

This figure has all the given and unknown parts labeled for you. 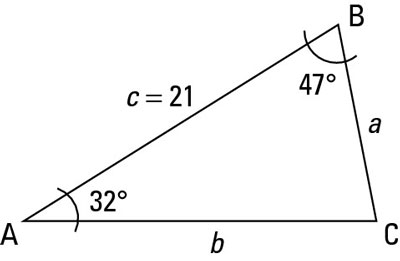 To find the missing information with the Law of Sines, follow these steps:

In many trig problems, you're given two angles and a side that isn't between them. This type of problem is called an AAS problem. For example, you may be given 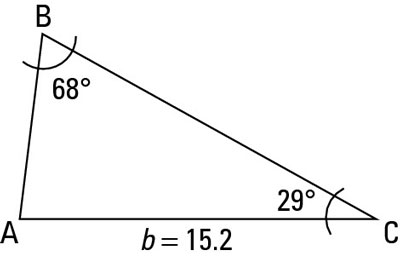 Notice that if you start at side b and move counterclockwise around the triangle, you come to

This check is a good way to verify whether a triangle is an example of AAS.

After you find the third angle, an AAS problem just becomes a special case of ASA. Here are the steps to solve: