Determining the Length of an Arc

Explore Book Buy On Amazon
Knowing how to calculate the circumference of a circle and, in turn, the length of an arc — a portion of the circumference — is important in pre-calculus because you can use that information to analyze the motion of an object moving in a circle.

An arc can come from a central angle, which is one whose vertex is located at the center of the circle. You can measure an arc in two different ways:

If you think back to geometry, you may remember that the formula for the circumference of a circle is

with r representing the radius. Also recall that a circle has 360 degrees. So if you need to find the length of an arc, you need to figure out what part of the whole circumference (or what fraction) you're looking at.

You use the following formula to calculate the arc length: The symbol theta (θ) represents the measure of the angle in degrees, and s represents arc length, as shown in the figure: 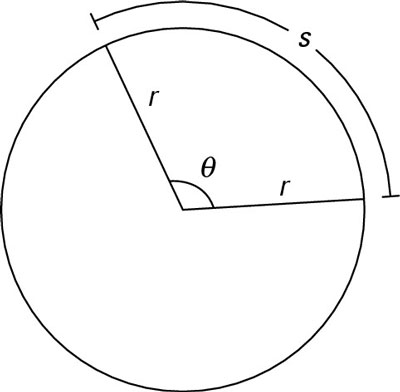 If the given angle theta is in radians,

Time for an example. To find the length of an arc with an angle measurement of 40 degrees if the circle has a radius of 10, use the following steps: 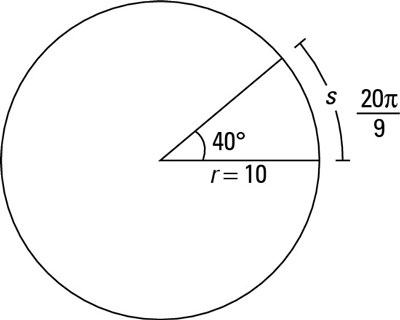 The arc length for an angle measurement of 40 degrees
Now try a different problem. Find the measure of the central angle of a circle in radians with an arc length of

and a radius of 16. This time, you must solve for theta (the formula is s = rθ when dealing with radians):