The Basics of Pie Charts

Explore Book Buy On Amazon
A pie chart looks – you’ve guessed it – a bit like a pie. The chart is a circle with various-sized slices ‘cut out’ from the middle to the edge. The size of the slices shows the relative size of the categories. You often see a pie chart showing the results of an opinion poll. 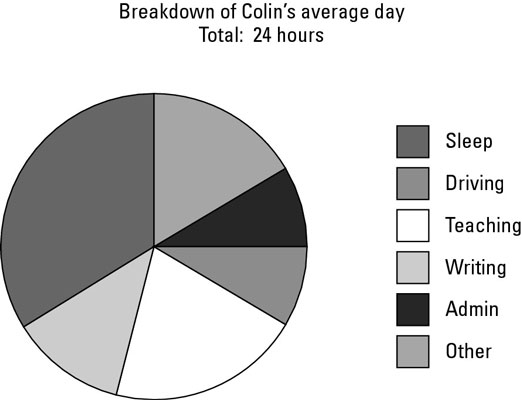 Deciding when to use a pie chart

You use a pie chart rather than a bar chart when you’re not very interested in the actual numbers you want to represent but want to see how big the groups are compared with each other.

A good example is if you want to give a presentation about the age groups of your company’s customers but don’t want the audience to know precisely how many customers you have.

You frequently see pie charts on election-night reports on TV to show the distribution of votes. In a very close election race, the slices representing the two front-runners are almost the same size.

You probably won’t be surprised to find that you can work out the values associated with pie charts using the Table of Joy. A whole circle contains 360 degrees. In a pie chart, those 360 degrees correspond to the total of the values represented in the chart.

When you work with a pie chart, you may need to figure out one of the following three things: To find one of these things, you need to know the other two. Here’s how to use the Table of Joy to work with a pie chart: To convert an angle into a percentage (or vice versa) you use a similar process. The whole circle – 360 degrees – corresponds to the whole of the data – 100 per cent. Use the same steps, but change the ‘value’ column to ‘per cent’, and in the ‘circle/per cent’ cell write 100.