Working with Definitions, Theorems, and Postulates

Definitions, theorems, and postulates are the building blocks of geometry proofs. With very few exceptions, every justification in the reason column is one of these three things. The below figure shows an example of a proof.

Using definitions in the reason column

Definition: A definition defines or explains what a term means. Here’s an example: “A midpoint divides a segment into two congruent parts.” 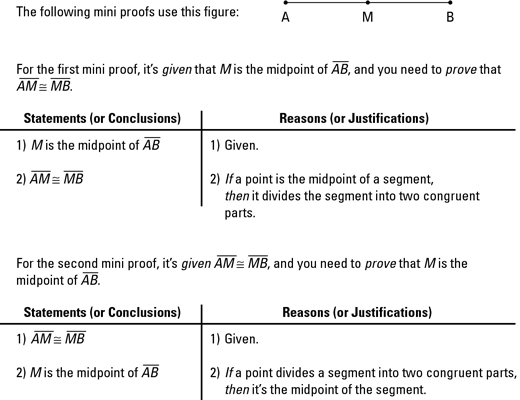 The above figure shows you how to use both versions of the midpoint definition in a two-column proof.

Using theorems and postulates in the reason column

Theorem and postulate: Both theorems and postulates are statements of geometrical truth, such as All right angles are congruent or All radii of a circle are congruent. The difference between postulates and theorems is that postulates are assumed to be true, but theorems must be proven to be true based on postulates and/or already-proven theorems. This distinction isn’t something you have to care a great deal about unless you happen to be writing your Ph.D. dissertation on the deductive structure of geometry. However, because you’re probably not currently working on your Ph.D. in geometry, you shouldn’t sweat this fine point.

When you’re doing your first proofs, or later if you’re struggling with a difficult one, it’s very helpful to write your reasons (definitions, theorems, and postulates) in if-then form. When you use if-then form, the logical structure of the proof is easier to follow. After you become a proof expert, you can abbreviate your reasons in non-if-then form or simply list the name of the definition, theorem, or postulate.